Ashwin had completed his quota of four overs within the first 13 overs of the match and had left the field to treat his back pain. Kohli was at the crease then and he immediately walked up to the umpire and asked them what was happening. Ponting certainly heard Kohli’s discussion and was involved in a verbal spat with the RCB skipper. 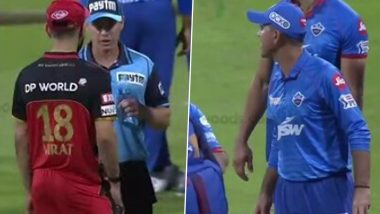 Delhi Capitals’ spinner Ravichandran Ashwin confirmed there was a heated argument between coach Ricky Ponting and Royal Challengers Bangalore (RCB) captain Virat Kohli during the DC vs RCB IPL 2020 match on November 2. Kohli and Ponting had allegedly exchanged some heated words and were involved in a verbal spat during the strategic timeout before the umpires intervened. Now Ashwin has revealed that the argument centred around him after he had to go off the field due to back pain. India Cricket Team to Don Retro Kit for Australia ODI and T20I Series? Fans Speculate About ‘1992 Themed New Jersey’ for Australia 2020–21 Tour (See Pics).

Ashwin had completed his quota of four overs within the first 13 overs of the match and had left the field to treat his back pain. Kohli was at the crease then and he immediately walked up to the umpire and asked them what was happening. Ponting certainly heard Kohli’s discussion with the umpires and was involved in a verbal spat with the RCB skipper. Fortunately, the spat remained on the field and didn’t create any major controversy. Jasprit Bumrah and Jofra Archer Bowled Most Dot Balls in IPL 2020.

"I had a back problem when I ran. It was a terrible pain. They took MRI scans and it was traced to a nerve pull to back. I went off after bowling. And you know Ricky, he won’t leave any fight. And when RCB questioned, he said we aren’t like that etc. Heat of moment," Ashwin said in his YouTube show after IPL 2020 came to an end on Tuesday (November 10) with Mumbai Indians beating Delhi Capitals by five wickets to win the final and lift their fifth IPL title.

So something did happen with Kohli and Ponting at strategic timeout! Kohli was discussing something with umpires. Ponting then said something. #IPL2020 pic.twitter.com/yeadakw5pb

It was in the same match where Ashwin dismissed Kohli for the first time in his IPL career. The 34-year-old revealed he loves bowling to Kohli as he and MS Dhoni are two batsmen who would never want to give his wicket away to him.

“I have always loved bowling to Virat. He would never take chances against me. Would not give his wicket; it was a matter of pride for him. MS Dhoni also, is like that,” said the off-spinner in his YouTube show. “In Pune, 2016, I set him up with a ball outside off and it went really high and just as I was thinking, “Aaha, Kohli wicket,” Ankit Sharma let the ball slip through his hands at extra cover! Ai! What have you done!

“From then on, people would keep saying Ashwin hasn’t taken a wicket of Kohli… and so when I finally took his wicket now, it was a happy and a pleasing moment; a personal justification of sorts,” he added.

Ashwin’s Delhi eventually had the final laugh that day as they beat RCB by six wickets in that encounter to finish in the top two of the IPL 2020 points table. Delhi went on to lose against Mumbai Indians in Qualifier 1 but beat Sunrisers Hyderabad to advance to their maiden final before once again falling short against Rohit Sharma’s men in the final.

(The above story first appeared on LatestLY on Nov 12, 2020 11:37 AM IST. For more news and updates on politics, world, sports, entertainment and lifestyle, log on to our website latestly.com).