Virat Kohli Shares Heartfelt Post on Father’s Day 2020, Says ‘Be Grateful for the Love of Your Father’ (See Post) 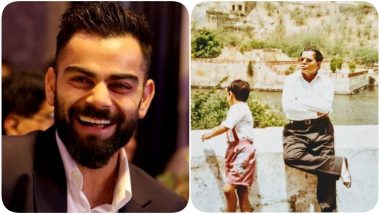 Virat Kohli might have lost his father when he was still young, but his father Mr. Prem Kohli has had a profound impact on him. On Father’s Day, the Indian cricket captain took to social media and posted a snap with his father and also wrote a heartfelt post. Where he said that one should be grateful for the love of your father. Fathers have been one of the most important people of the children’s lives. They surely are the ones who make the utmost amount of sacrifices for the kids and no amount of thanksgiving can suffice the hard work put in by the fathers. Virat Kohli Recalls Incident When His Late Father Refused to Bribe for State Selection and Taught Him Invaluable Lesson.

To celebrate this spirit of fathers all around the country, every third Sunday of June is considered to be Father’s Day. Many celebrities including Rohit Sharma and Sachin Tendulkar also posted a heartfelt message for their respective fathers. Now even Virat Kohli posted a heartfelt post along with the throwback picture. In the snap, we see Virat Kohli as a kid staring at something with his father sitting a couple of meters away from him besides a waterbody.

This father's day, I urge you all to be grateful for the love of your father but always look for your own path to move forward in life. You'll never have to look behind because they're always watching over you wether they're physically there or not. Happy father's day 😊💛

Not very long ago did the Indian cricket captain spoke about how his father taught him to play on his talent and refused to bribe a selector for making a place in the team. Kohli on many occasions had spoken about how close was he close to his father.

(The above story first appeared on LatestLY on Jun 21, 2020 05:55 PM IST. For more news and updates on politics, world, sports, entertainment and lifestyle, log on to our website latestly.com).