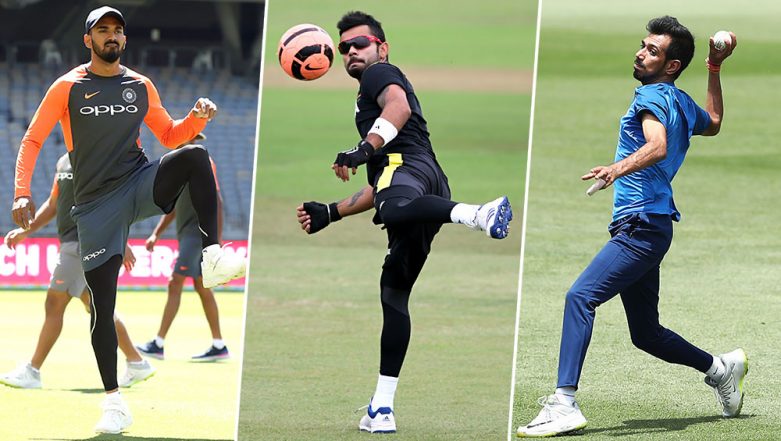 With the victory against Bangladesh in ICC Cricket World Cup 2019, Indian team now have a moment of relief as the men in blue have confirmed their place in the semi-finals of World Cup 2019 tournament. After the victory against their Asian rival at Edgbaston, Birmingham by 28 runs, Indian spinner Yuzvendra Chahal came up with a video of his popular Chahal TV episode while interviewing opener KL Rahul. Virat Kohli to Arrange Tickets for 87-Year-Old Fan Charulata Patel for Remaining Indian Matches of CWC 2019.

During the shooting of the video, Virat Kohli suddenly made a special appearance and the video was interrupted by the captain's entry. KL Rahul was talking about his partnership with Rohit when the funny moment occurred. The video was shared by BCCI on Twitter. Have a look at the video below. Virat Kohli Argues With Umpire After DRS Against Soumya Sarkar Goes Wrong During IND vs BAN CWC19 Match.

After Kohli appeared in the video, Chahal took a dig at him saying that the Indian captain was trying to be part of the video. To this Kohli replied that he didn't want to join the video and Rahul had asked him to meet him.

Leg spinner Chahal, who is showing a great performance in CWC 2019, appreciated KL Rahul for scoring highest opening partnership of Indian team in CWC 2019 with Rohit Sharma in the match against Bangladesh. The right-handed batsman also spoke about his innings and successful journey in the CWC 2019 tournament so far.