The matches can be watched live from 3:30 p.m. on SONY SIX channels from Wednesday. Asked about the saliva ban, Holder said it has not been much of a problem in the warm-up game but they will have to wait and watch how it goes in the first Test. 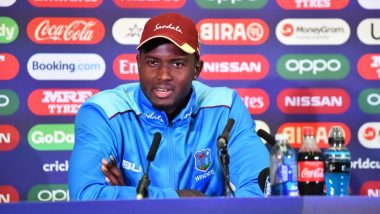 Southampton, July 7: Jason Holder on Tuesday said West Indies have improved a lot as a Test outfit and can now challenge any top team in the world in the five-day format which is considered their weakest link. The Windies, led by all-rounder Holder, will lock horns against England in a three-Test series starting Wednesday at the Ageas Bowl, and it will mark the resumption of cricket after the sport was suspended in March due to the COVID-19 pandemic.

Former West Indies captain and batting great Brian Lara has said Holder's troops will have to try and finish the game inside four days as they won't be able to attain a positive result if the Test matches against England go into the fifth and final day. Chris Gayle, Andre Russell and Jason Holder Told Me That India Deliberately Lost to England to Eliminate Pakistan From 2019 World Cup: Mushtaq Ahmed.

"England will come at us hard. We expect a tough contest and the onus is on us to dethrone England in their own backyard and it's not going to be easy," said the world's No. 1 ranked Test all-rounder. The matches can be watched live from 3:30 p.m. on SONY SIX channels from Wednesday. Asked about the saliva ban, Holder said it has not been much of a problem in the warm-up game but they will have to wait and watch how it goes in the first Test.

"The only thing we can do is put the body sweat on it (ball). There is nothing else we can do. As to the impact, it can only be told when the series starts. We have tried it in the warm-up games and it hasn't gone too badly for us. Lets see what happens on the field. Conditions will have a lot of impact. It will be a trial and error in this series."

All eyes will be on all-rounders Ben Stokes and Holder in Southampton as they will lead their respective teams on the pitch at Ageas Bowl to mark the beginning of this historic series. England's World Cup hero Stokes is second to Holder in allrounders' rankings in Tests. Asked about the personal battle, Holder said: "I don't get caught up with it, my job is to play."

Holder became the first West Indian since the great Garfield Sobers to be named as the world's leading all-rounder following his superb display against England in Barbados last year. "It feels good to be in elite company, I have had tons of conversations with him and he is so positive. He is one of those guys who will put his arm around you and nurture you," said Holder of Sobers.

(The above story first appeared on LatestLY on Jul 07, 2020 10:30 PM IST. For more news and updates on politics, world, sports, entertainment and lifestyle, log on to our website latestly.com).