Why is Rohit Sharma Not Playing in CSK vs MI in IPL 2021? Why is Kieron Pollard Captaining Mumbai Indians Tonight? 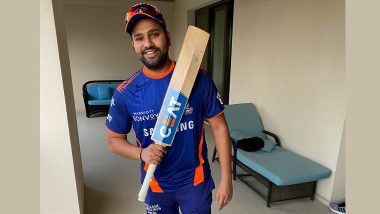 One of the biggest questions that fans are left with is why Rohit Sharma, who is the regular skipper for the Mumbai Indians, not playing this important match against Chennai Super Kings? In his place, it was Kieron Pollard who walked out during the toss and stated that his side would be without Sharma and also Hardik Pandya for his fixture. The opening batsman seemed to be in discomfort while training ahead of the match and he was subsequently ruled out of the contest. If that wasn't a good enough blow, the defending champions would also be without the services of swashbuckling all-rounder Hardik Pandya, who too was ruled out of this match. Missing these two very important players indeed would be a setback for Mumbai, given the fact that they are fourth in the table and in need of a good start to the second phase, which would be a hotly contested one between all the teams, who have had such a long break from the tournament. CSK vs MI Live Score Updates of VIVO IPL 2021: Rohit Sharma and Hardik Pandya Misses Out Due to Injuries, Pollard To Lead Mumbai

Chennai Super Kings had emerged victorious the last time these two sides had met in the first phase of the competition before the second wave struck and it was postponed. Chennai, riding on stellar knocks fromAmbati Rayudu, Faf Du Plessis and Moeen Ali, posted a mammoth 218/4, something that is difficult to chase down in 20 overs, But Mumbai made a game out of it, owing to a scintillating 87-run knock from Kieron Pollard as they won the game on the very last ball. This contest could prove to be a thrilling one this time too. Only time would say how much Mumbai would miss skipper Sharma and Hardik Pandya for this match,

(The above story first appeared on LatestLY on Sep 19, 2021 07:32 PM IST. For more news and updates on politics, world, sports, entertainment and lifestyle, log on to our website latestly.com).