The final of the 2021-23 World Test Championship (WTC) final is likely to be played at Lord's as ICC is trying to organise the mega event at the iconic venue. 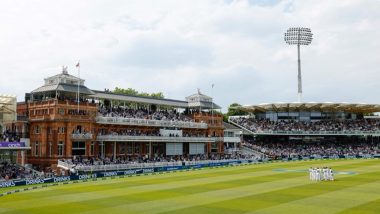 London, June 3: The final of the 2023 World Test Championship (WTC) final is likely to be played at Lord's as ICC is trying to organise the mega event at the iconic venue. Lord's was informally designated as the venue for the first WTC final last summer but the game was instead played in Southampton at the Ageas Bowl due to the Covid-19. At the time, England was still moving out of restrictions put in place because of the pandemic. Moeen Ali, England and CSK Star, Gets OBE; Says Open To Come Out of Test Retirement.

Southampton was seen as the ideal venue logistically to keep players in a bio-secure bubble because of its on-site hotel. The Kane Williamson-led New Zealand beat Virat Kohli's India in the final to become the inaugural Test world champions. However, now the restrictions have ended in the UK and bio-secure bubbles have been eased out, the ICC are hoping once again to stage the final at Lord's. "I think it is scheduled for Lord's, that was always the intention," ICC chairperson Greg Barclay said on BBC's Test Match Special at tea on the second day of the first Test between England and New Zealand, at Lord's. ENG vs NZ 1st Test 2022: Daryl Mitchell, Tom Blundell Lead New Zealand’s Comeback at Lords on Day 2.

"It's June so that rules out a number of other venues and we've got to get certainty around where it's hosted. We're out of Covid now so subject to arrangements being made and being able to be hosted out of Lord's I think that's the intention," he added. England are likely to host a one-off Test against a yet-to-be finalised opponent next summer before then hosting the Ashes. That would seem to increase the chances of Lord's hosting the world final, an ESPNcricinfo report said. There is still some work to be done before Lord's is finalised, however, the ICC are hoping to announce the venue at their Annual General Meeting next month.

(The above story first appeared on LatestLY on Jun 04, 2022 11:13 AM IST. For more news and updates on politics, world, sports, entertainment and lifestyle, log on to our website latestly.com).