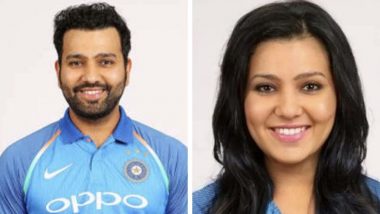 An online trend has taken over social media recently in which people are using the FaceApp photo editing app to completely change their appearance. The application allows user to see what they would look like when they change their gender in the photo. And Indian spinner Yuzvendra Chahal also jumped on the bandwagon as he trolled Rohit Sharma while using the new popular app. Yuzvendra Chahal Calls Chris Gayle Uncle After Universe Boss Tried to Troll the Indian Spinner on Instagram.

Yuzvendra Chahal turned to his usual self on social media as with the help of the gender-swap app he shared a hilarious photo of Rohit Sharma in which the Indian opener was made to look like a woman. ‘So cute u looking Rohitaaaaaa Sharammaaaaa bhaiya’ the Indian spin wizard captioned his post. Rohit Sharma Trolls Netizen Who Asked Him to Describe Virat Kohli in One Word.

After Chaal posted the photo, fans came up with hilarious reactions of their own as they tried morphing the photos of other players as well.

Need to Do Something About It

Rohit sharma after seeing this pic.twitter.com/ihqHzPxFGS

Yuzvendra Chahal is well known for his quirky photos and videos on social media. The cricketer has made a name for himself with his show Chahal TV, in which he speaks with other cricketers and shares hilarious banters with them.

Rohit Sharma and Yuzvendra Chahal have a long history of trolling each other on social media, the Indian opener recently made fun of Chahal for his TikTok videos and also took a dig at the spinner on one of his Instagram posts.

In the picture Yuzvendra Chalal could be seen wearing a loose T-Shirt and pointing that out Sharma replied ‘Kapde ke andar tu hai ya kapda tere andar hai’.

(The above story first appeared on LatestLY on Jun 19, 2020 01:29 PM IST. For more news and updates on politics, world, sports, entertainment and lifestyle, log on to our website latestly.com).