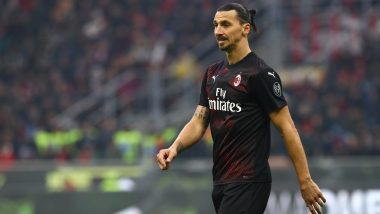 Zlatan Ibrahimovic is truly one of the players who keep challenging age every time he steps on the field. Once again the 38-year-old showed how good he was as a player for AC Milan as they won 1-4 against Sampdoria. The former Manchester United striker scored a brace and reached the 50 goal mark for the Rossoneri. This obviously included the number of goals he had scored back then during 2010-2012. He had spent a couple of years, with the club and thus became the first player to score 50 goals for AC Milan and Inter Milan. Zlatan Ibrahimovic Scores Twice in AC Milan’s 4–1 Victory Over Sampdoria to Reach 50-Goal Mark for Rossoneri (Watch Goal Video Highlights).

The former Manchester United striker had scored 57 goals for Inter when he spent three years at the club for the period of three years i.e. 2006-2009. Post this he made an exit to Barcelona to rub shoulders with Lionel Messi. Talking about the match last night, he scored goals at the fourth and 58th minute and thus gave a much-needed respite to the club. The Rossoneri have been unbeaten ever since the restart of Serie A 2019-20.

With this, Zlatan has now scored 10 goals in eight of his outings with AC Milan. The former LA Galaxy striker is on the brink of completing his stint with the club. He arrived here in January for a short period of six months and now as his contract nears an end, the fans would be hoping that Zlatan would be retained by the club. As per several reports, the club is on the verge of offering him a new contract. However, there is no official word on the same.

(The above story first appeared on LatestLY on Jul 30, 2020 01:47 PM IST. For more news and updates on politics, world, sports, entertainment and lifestyle, log on to our website latestly.com).