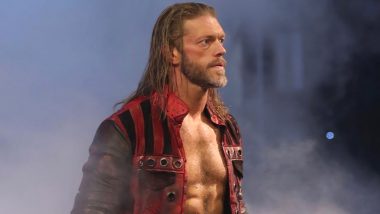 WWE superstar Edge shares painful pictures of his tricep surgery thereby shutting rumours of his injury being part of the storyline. The Rated- R Superstar incurred the injury during his match against Randy Orton at WWE Backlash 2020. This match was termed as the 'Greatest Wrestling Match Ever' where both wrestlers left no stone unturned in putting up a great fight which will be remembered for years to come. Let us see below the images of Edge torn triceps, however, viewer discretion is advised, as the images are quite horrifying and gruesome. WWE Raw June 22, 2020 Results and Highlights: Dolph Ziggler Challenges Drew McIntyre For Title Match; Big Show Confronts Randy Orton & Ric Flair (View Pics)

Edge made a return to the wrestling ring this year at Royal Rumble 2020, after a gap of nine years. He then fought Randy Orton in 'Last Man Standing Match' at WrestleMania 36. The WWE Hall of Famer won that match and thereby proves that he still has a lot of wrestling left in him. Looking at the success of Edge vs Randy Orton match at WrestleMania 36, WWE booked them again for a match at Backlash 2020. Brock Lesnar Gets Accused of Sexual Harassment by Former WWE Diva Terri Runnels Amid #SpeakingOut Movement.

The expectations from Edge were high in that match and Rated-R superstar did put up a good fight. However, in this process, he incurred an injury during the match. Many people claim that Edge's torn triceps is fake and it is just another storyline to keep him away from the action. Edge shared his pictures with the caption, 'Some folks have asked if my injury is part of a storyline. It’s not. I wish it was. Here’s what a torn triceps looks like. Elbow Tartare. Now, nose to the grindstone'.

Some folks have asked if my injury is part of a storyline. It’s not. I wish it was. Here’s what a torn triceps looks like. Elbow Tartare. Now, nose to the grindstone.

The WWE Hall of Famer did promise this past week on Raw to his fans through a video that he will make Randy Orton pay for what he has done to him. However, looking at above surgery pictures, it seems that Edge will be away from in-ring action for many months. As Edge's fan, we hope that he recovers soon.

(The above story first appeared on LatestLY on Jun 25, 2020 06:52 PM IST. For more news and updates on politics, world, sports, entertainment and lifestyle, log on to our website latestly.com).