Edge Wishes to Fight Ricochet After Recovering From His Injury, The Rated R Superstar Reveals in Podcast 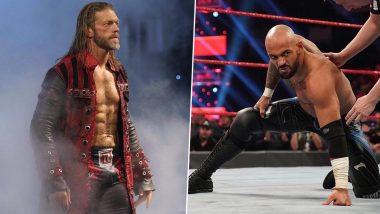 WWE Hall of Famer Edge in a recent podcast reveals that he wishes to fight Ricochet, once he returns to ring for in-ring action. Edge is recently out of action due to torn triceps. The Rated R Superstar incurred this injury at Backlash while he was in a match against Randy Orton. This match was headlined as 'The Greatest Wrestling Match Ever'. As of now, Edge underwent surgery a few weeks back and it will take months for him to recover soon. Edge Shares Painful Images of His Tricep Surgery, The Rated-R Superstar Confirms His Injury Not Part of WWE Storyline (View Pics)

Meanwhile, Edge while speaking on ESPN's Cheap Heat podcast with Peter Rosenberg said that he is dying to get in the ring with Ricochet. He is quite impressed by Ricochet's high flying ability in the ring. Edge also mentioned that he would also look forward to a match against Shinsuke Nakamura, Seth Rollins, Matt Riddle, Cesaro and current Intercontinental Champion AJ Styles. WWE Raw Results and Highlights, July 6, 2020: Kevin Owens, Rey Mysterio Defeat Seth Rollins, Buddy Murphy in Tag Team Match, Asuka Emerges Victorious Over Bayley in 'Champion vs Champion' Contest.

Yeah, there's Rollins, that's a gimme. There's AJ Styles. A guy like Cesaro, a guy like Shinsuke, Matt Riddle. I look at a guy like Ricochet - oh my God - I'd die to get in the ring with him," Edge said on the recent podcast on Cheap Heat. Speaking about Ricochet, he is currently signed with the Raw brand of WWE and not involved in a major storyline as of now.

If Ricochet did get a match in future against Edge, it will be a great push for his career. Ricochet wasn't able to get a good push where he challenged Brock Lesnar for WWE Championship at Super ShowDown 2019. Ricochet faced brutal defeat in that match by Lesnar in just matter of few minutes.

(The above story first appeared on LatestLY on Jul 08, 2020 06:53 PM IST. For more news and updates on politics, world, sports, entertainment and lifestyle, log on to our website latestly.com).