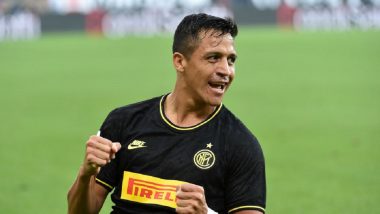 Alexis Sanchez has complete a free transfer to Inter Milan from Manchester United on a three-year contract. Sanchez, who joined United in 2018, had been on a loan at Inter for the past season after failing to light up Old Trafford since moving there from Arsenal in January two years ago. The Player and the club decided to mutually terminate his United contract, which still had two years remaining and join the Serie A club as a free agent. United though get to save about £40m in wages with Sanchez on a £390,000 per-week salary. Ole Gunnar Solskjaer Confirms Alexis Sanchez Inter Milan Move.

The Chilean has reportedly accepted to significantly receive a lower amount of wages at Inter although he has received a substantial pay-off from United after agreeing to terminate his contract. “FC Internazionale Milano announce that Alexis Sanchez has joined the Nerazzurri on a free transfer. The Chilean forward has signed a permanent contract with the Club until 30 June 2023,” the Italian club said in a statement on its website. Jadon Sancho Transfer News Update: Borussia Dortmund Expect Manchester United Target to Stay With the Club This Summer.

Sanchez’s exit, therefore, clears the way for the potential signing of Jadon Sancho from Borussia Dortmund. United are already in talks with the Bundesliga club for the bringing the former Man City star back to the Premier League. The Red Devils could, however, be compelled to break the Premier League record for an England player if they are to sign the 20-year-old right-winger. Dortmund has priced Sancho at £108 million, a price United are currently refusing to pay.

An update on Alexis Sanchez...#MUFC

Sanchez, 31, scored only five goals in 45 matches for the Red Devils and failed to live up to expectations after joining from Arsenal. “Everyone at Manchester United wishes Alexis Sánchez all the best in his future career,” Manchester United said in its statement. Despite his struggles at Old Trafford, Sanchez has performed fairly with Inter and has already scored four times in 30 matches for the Serie A club.

(The above story first appeared on LatestLY on Aug 06, 2020 06:00 PM IST. For more news and updates on politics, world, sports, entertainment and lifestyle, log on to our website latestly.com).