Both the countries' football associations were fined and Argentina's Emiliano Buendía, Emiliano Martínez, Giovani Lo Celso and Cristian Romero have been banned for two games each. The match in question, was suspended last year after Brazil health officials ran onto the pitch and accused the four Argentina stars of breaching the country's COVID-19 protocols. 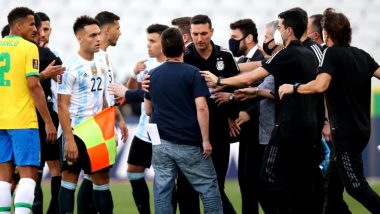 A still from the Argentina vs Brazil match that was suspended (Photo credit: Twitter)

The Argentina vs Brazil  2022 World Cup CONMEBOL Qualifier match that was suspended last year, would now be replayed at a later date and time and at a neutral venue, a statement by FIFA confirmed. The South American giants had begun playing the game back in September last year when Brazil health officials ran onto the pitch and charges four Argentina players with breaching the nation's COVID-19 protocols. Lionel Messi Provides Stunning Assist to Kylian Mbappe During PSG vs Rennes, Ligue 1 2021-22 Match (Watch Video)

FIFA, in a statement, said, "After a thorough investigation of the various factual elements and in light of the applicable regulations, the FIFA Disciplinary Committee has decided that the match should be replayed on a date and at a location to be decided by FIFA."

The disciplinary committee also stated that both the football associations would be fined and additionally, the four players in question--Emiliano Buendía, Emiliano Martínez, Giovani Lo Celso and Cristian Romero would face a ban for two games each for breaching,  'FIFA Return to Football International Match Protocol.'

The match was stopped after five minutes when health officals came on the pitch. This happened because according to Brazil's quarantine protocols for protection against COVID-19, people who had been to countries like India, South Africa and UK were barred from entering the country with two exceptions-- the person or people concerned had to be Brazilian citizens or they have a permanent residence in the country. Argentine officials argued that they thought the same protocols (ones used for the Copa America) were in place and hence, the players who had travelled from England, might not have been aware of these other restrictions.

It has also been reported that this decision has been challenged by the Argentine FA. Both Lionel Messi's Argentina and Neymar's Brazil have qualified for the 2022 FIFA World Cup in Qatar.

(The above story first appeared on LatestLY on Feb 15, 2022 09:06 PM IST. For more news and updates on politics, world, sports, entertainment and lifestyle, log on to our website latestly.com).