Argentina vs Paraguay, Copa America 2021 Live Streaming Online & Match Time in IST: How to Get Live Telecast of ARG vs PAR on TV & Free Football Score Updates in India

Argentina, currently sitting on top of Group A with four points from two matches, would aim at a win that would secure their qualification into the knockouts. Paraguay are meanwhile on a hot streak against Argentina, remaining undefeated in their last eight matches. 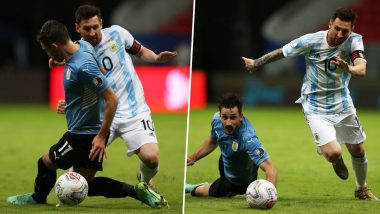 On a high after registering their first victory, Argentina would be aiming to secure a knockout berth when they take on Paraguay in a Group A encounter on Tuesday. The match would be played at the Estádio Nacional Stadium and is scheduled to begin at 05:30 AM IST (Indian Standard Time). Lionel Messi has led Argentina from the front in this competition so far. In the first match, the Barcelona star scored a jaw-dropping free-kick as his side played out a 1-1 draw against Chile. In the second game, Messi once again made an impact as he assisted Guido Rodrigues' 13th-minute strike, the only goal scored in that match. Argentina would once again look to their star performer to come up with something special against Paraguay. Sports News | Argentina Counting on Messi - and History - Against Paraguay

Paraguay also began their tournament on a high, defeating Bolivia 3-1. Quite interestingly, Argentina are yet to defeat Paraguay in the Copa America. Paraguay currently are also on an undefeated streak against Argentina. Messi's side has failed to defeat Paraguay in six years And La Albiceleste would be aiming to rewrite that script come Tuesday.

When is Argentina vs Paraguay, Copa America 2021 Match? Date, Time and Venue Details

Argentina vs Paraguay, Copa America 2021 clash will take place on June 22, 2021, Tuesday at the Estádio Nacional Stadium in Brazil. The Group A Copa America 2021 match has a scheduled time of 05:30 am IST (Indian Standard Time).

Sony Pictures Networks India is the official broadcaster of UEFA EURO 2020 in India. It will broadcast Argentina vs Paraguay, Copa America 2021 live match on the Sony Sports channels and Sony Ten 2 will telecast the game on TV.

(The above story first appeared on LatestLY on Jun 21, 2021 10:27 PM IST. For more news and updates on politics, world, sports, entertainment and lifestyle, log on to our website latestly.com).