Germany had triumphed 6-0 the last time these two sides squared off in the FIFA World Cup 2022 European Qualifiers two months ago. Based on form, they are expected to win this time as well. 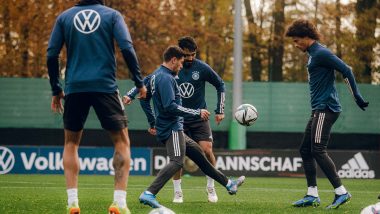 Germany, already having qualified for the 2022 FIFA World Cup would aim to sign off their campaign in the qualifiers on a high when they face Armenia in their last match on Sunday. The 2014 World Champions have dominated Group J in the qualifiers so far with eight wins in nine games and the most dominant of them came in their last match against Liechtenstein, whom they defeated 9-0. Their recent form suggests that another big win might be on their way and Hansi Flick would once again want the likes of Leroy Sane, Thomas Mueller and Marco Reus to fire all guns blazing on Sunday. Armenia on the other hand, have slim hopes of making it to Qatar and would need a huge effort if they plan on defeating an in-form German side. France 8–0 Kazakhstan, FIFA World Cup 2022 European Qualifiers Video Highlights: Kylian Mbappe Scores Four Goals As Champions Book Ticket to Qatar in Style

They would rely a lot on star player Henrikh Mkhitaryan, who has experience of competing in several European leagues. On the other hand, Germany would want Sane to come good once again. Flick, who already has the experience of working with the young winger at Bayern Munich, trusts in the abilities of the 25-year old and it can be expected that he would not disappoint. The last encounter between these two sides came in September this year where the former World Champions ended up as victors, winning the match 6-0. A German win can be predicted once again.

Armenia vs Germany clash in FIFA World Cup 2022 European Qualifiers will be played at the Republican Stadium on November 14, 2021 (Sunday). The game has a scheduled time of 10:30 pm IST (Indian Standard Time).

Where To Watch Live Telecast of Armenia vs Germany, FIFA World Cup 2022 Qualifiers on TV?

Sony Pictures Network are the official broadcasters of FIFA World Cup 2022 European Qualifiers in India and will telecast the games live on its channels. Fans can tune into Sony Ten 2 SD/HD channels to watch the live telecast of Armenia vs Germany on TV.

Sony Pictures Network’s official OTT platform Sony Liv will be streaming the game live for its fans in India. You can tune into the Sony Liv app or website to watch Armenia vs Germany, FIFA World Cup 2022 Qualifiers live streaming online.

(The above story first appeared on LatestLY on Nov 14, 2021 05:11 PM IST. For more news and updates on politics, world, sports, entertainment and lifestyle, log on to our website latestly.com).