The North London outfit are in pursuit of a striker and have been linked to Gabriel Jesus over the past few months. With the Brazilian needing a £55million transfer fee, Arsenal have reportedly started exploring other options, with Paulo Dybala among them. 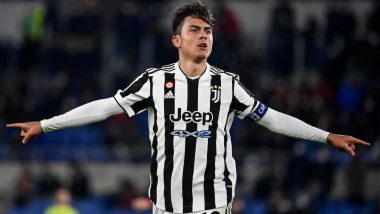 Arsenal have contacted Paulo Dybala to sign him as an alternative to Gabriel Jesus, according to a report. Dybala has been linked with several clubs recently after it came to be known that his time at Juventus would end after this season. Now he has attracted the interest of Arsenal, who would be needing a striker badly as the season draws to a close. They can still qualify for the Champions League with one game remaining and need a frontman to lead their attack next season, especially with uncertainties prevailing over the contract situations of Alexander Lacazette and Eddie Nketiah. Paul Pogba Reportedly Turned Down Manchester City’s Offer To Avoid Backlash From United Supporters

The Gunners had reportedly made contact with Gabriel Jesus and his representatives over a switch to London this summer but have been exploring other options with £55million reportedly required to sign the Brazilian, who still has a year left on his Manchester City contract. The North London outfit has reportedly turned to Dybala as an alternative and they join the list of clubs pursuing the 28-year-old at the end of this season. Dybala had a teary farewell at Juventus in their last home game of the season and reports have linked him to a move to Inter.

But the Argentine can explore options abroad as well. Manchester United have also been said to have interest in signing the forward as part of their rebuilding plans under new manager Erik ten Hag.

(The above story first appeared on LatestLY on May 20, 2022 01:12 PM IST. For more news and updates on politics, world, sports, entertainment and lifestyle, log on to our website latestly.com).