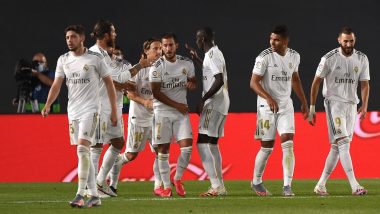 Real Madrid have the chance to go 7 points clear at the top of the Spanish La Liga albeit temporarily when it faces Athletic Bilbao in an early kick-off. The Los Blancos are in fine form at the moment, winning games with ease without hitting top gear yet. Zinedine Zidane has been managing his team well by reshuffling his pack well and keeping the players hungry for success. 8th placed Athletic Bilbao at home can be a bit of a struggle for any top team to break down which sets up for a fascinating contest. Athletic Bilbao versus Real Madrid will be streamed on the Facebook page of La Liga from 5:30 PM IST. Espanyol 0–1 Real Madrid, La Liga 2019–20 Match Result: Casemiro Strike Sends Los Blancos Two Points Clear at the Top.

Athletic Bilbao will line up in a 4-2-3-1 formation that seems to get the best out of them. Iker Muniain is the key player of the team with his role being that of a floater. The Spanish playmaker will occupy the spaces in the final third and set up play for striker Raul Garcia. Mikel Vesga and Dani Garcia are the two sweepers in the middle with their primary role being protection of the back four. Unai Simon between the sticks can expect a busy afternoon with Real Madrid boasting of an in-form attack. Sergio Ramos Should Retire Here at Real Madrid, Says Zinedine Zidane.

Eden Hazard has not recovered from an ankle injury and will not feature against Athletic Bilbao. Kari Benzema will be flanked by young attacking wingers – Vinicius Jr and Rodrygo, who can tear apart defences with their frightening pace. In midfield, Zinedine Zidane prefers the combination of Casemiro, Toni Kroos and Luka Modric and will stick to them in the starting eleven. Eder Militao is the natural replacement for Raphael Varane and should get the nod in the latter’s absence.

Where to Watch Live Telecast of Athletic Bilbao vs Real Madrid, La Liga 2019-20 Match on TV?

Unfortunately, three are no official broadcasters of La Liga2019-20 in India. Hence, fans will not be able to watch the game live of any of the TV channels.h

How to Get Free Live Streaming Online of Athletic Bilbao vs Real Madrid, La Liga 2019-20 Match?

Athletic Bilbao vs Real Madrid clash in La Liga can be streamed online of the Facebook channel of La Liga. So fans can log onto the La Liga FB page to cat the live-action of the game. Real Madrid have not lost a game at San Mames in their last four visit and looks like the positive trend will continue for them. Expect a low scoring game with the visitors prevailing in the end.

(The above story first appeared on LatestLY on Jul 05, 2020 12:12 PM IST. For more news and updates on politics, world, sports, entertainment and lifestyle, log on to our website latestly.com).