Australia will face France on June 16 in their 2018 FIFA World Cup opening fixture. 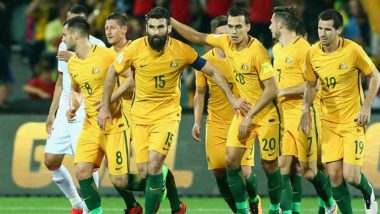 The rise of A league in Australia over the past decade or so has certainly boosted the Australian football and it also has exported quite a few to the English league and the desire of every Australian would be for their team to make it through to the knockout stages of 2018 FIFA World Cup in Russia. But that again is easier said than done with the Socceroos placed in a tough group with France, Denmark and Peru in Group C- all sides ranked higher than the 40th placed Australians. Here's a look at a Australia preview with complete schedule timetable, match dates and kick off times. Australia will face France on June 16 in their 2018 FIFA World Cup opening fixture. These crucial matches will decide if Australia makes to Round of 16 in Russia. 2018 FIFA World Cup Schedule in IST for PDF Download: Fixtures, Groups, Time Table with Matches in Indian Time & Venue Details of Football WC in Russia.

The Socceroos foray into the 2018 FIFA World Cup has been a painstaking affair with them clinching the World Cup 2018 berth right at the very end after a number of qualifiers that saw them travel to countries like Iran, Bangladesh, Japan, Malaysia, Iran, Tajikistan and even the Honduras. The Asian giants have a new manager in Bert Van Marwijk who joined the team after guiding the Saudi Arabians to the World Cup 2018 finals. The coach had a very little time in knowing the qualities of his squad completely and but looks confident about Australia's final 23-man world cup squad including 38-year-old Tim Cahill.

The inclusion of a 38-year-old veteran striker Tim Cahill who has made to the final 23-man squad for Russia. Having been an integral part of the qualifying campaign, the Aussie legend has found playing time hard to come for his club Millwall FC and the new Dutch coach will have a tough time in getting this puzzle solved.

It was a long campaign for the Australian team as it made its way through three rounds of the qualifier in the Asian qualification campaign followed by the inter-confederation qualifier against Honduras. While it finished third in the Round three of Asian qualifier behind Saudi Arabia and Japan, it defeated the Syrians 3-2 on aggregate with experienced striker Tim Cahill netting the winner in extra time. 2018 FIFA World Cup Group C Preview: Schedule Timetable With Match Dates, Venues & Kick-Off Times in IST of France, Australia, Peru, and Denmark in Football WC.

Ange Postecoglou, the coach who led them through to the entire qualifying campaign put in some strange formations but still managed to get the job done against the Honduras in the inter-confederation qualifier, winning 3-1 on aggregate with all the goals coming in the second leg in Sydney. Captain Mile Jedinak put in a real shift and scored a hat-trick for his side to guide them through to Russia.

Mathew Leckie: The Hertha BSC winger has stepped up his performances in the German Bundesliga with some dazzling displays and also scoring important goals. He has 6 goals in 26 outings for Hertha and should be one of the first names in the starting line-up for the Socceroos. His pace and energy will be crucial to the Australians if they wish to make it to the round of 16.

Mile Jedinak: The towering presence of skipper Mile Jedinak is crucial for his team as the defensive midfielder presence in the middle of the park has a calming influence on the side. He can also crop up with those crucial odd goals as was evident from his hat-trick against Honduras in the qualifier. Equally important are his leadership qualities as he is someone the squad looks up to when the chips are down.

(The above story first appeared on LatestLY on Jun 14, 2018 11:29 AM IST. For more news and updates on politics, world, sports, entertainment and lifestyle, log on to our website latestly.com).