Ballon d'Or Nominations: From Cristiano Ronaldo to Lionel Messi, Here is List of Players With Most Nominations For Global Award

The Ballon d'Or or the 'Golden Ball' is awarded by the France Football since 1956 on the basis of performance of a player throughout the a calendar year. Scroll down below to know the players' names with most number of nominations in the history of award. 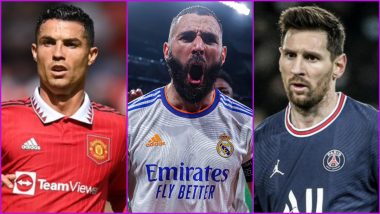 The France Football Federation have revealed the 30-man shortlist for the 2022 Ballon d'Or title on August 13. From Cristiano Ronaldo to Karim Benzema, many top starts have made it to the list while surprisingly Lionel Messi and Neymar Jr have failed to get a place in the shortlist this year. Messi and Ronaldo have been fighting with each other for the highest individual honour in the sports as the Argentine got the better of the Portuguese in this, winning Ballon d'Or for a record seven times while the latter lifted the title for five times so far. However, many are of the view that an underwhelming season at PSG which saw Messi score only 11 goals in 34 matches for the Parisians. On the other hand, Ronaldo netted 25 goals for Manchester United across all competitions and became the top scorer of the club last season. Lionel Messi MISSES OUT on Ballon d’Or 2022 Shortlist As France Football Names Nominees for Top Award

The Ballon d'Or or the 'Golden Ball' is awarded by the France Football since 1956 on the basis of performance of a player throughout the a calendar year. Earlier, this award was recognized as the 'European Footballer of the Year Award' where only European players could win the award. However, since 1995 the title went global and started to recognize the brilliance of the players all over the world. Stanley Matthews of Blackpool was the first player who received the first Ballon d'Or award in the football history in 1956. Since then plenty of players completed the top podium finish with their individual brilliance on turf to help their teams. Scroll down to below to check the list of players with most number of nominations in Ballon d'Or history so far. Yashin Trophy 2022: Thibaut Courtois, Alisson Becker Among 10 Players Nominated For Annual Award

5. Karim Benzema: The Real Madrid forward is going through the most prolific time in his career as he is favourite to win the Ballon d'Or 2022 award. The French attacker has been nominated for 12th time for the global award.
4. Johan Cruyff & Franz Beckenbauer: The Barcelona legend Cruyff won the top award for three times- 1971, 1973 and 1974. On the other hand, German star Beckenbauer claimed the global title for two times. Both of the legends were on the nomination list for 12 times.
3. Paolo Maldini: The Italian great, who has shockingly never won the prestigious Ballon d'Or trophy in his career, made it to the nomination shortlist for 13 times.
2. Lionel Messi: The Argentine maestro has won the France Football award for seven times so far, which is the most by any player in the history. The PSG forward has been able to secure 15th nomination so far.
1. Cristiano Ronaldo: The Portuguese, who is the highest goal scorer in the history of football, possessed the feat of being nominated for the most number of times for Ballon d'Or. The 37-year-old has been made it to the award shortlist for 19 times so far.

(The above story first appeared on LatestLY on Aug 13, 2022 06:43 PM IST. For more news and updates on politics, world, sports, entertainment and lifestyle, log on to our website latestly.com).