The Argentine did not find himself in the 30-man shortlist for the very first time since 2005. Messi had an underwhelming campaign for PSG last season and failed to live up to the expectations at Parc des Princes after moving from Barcelona. 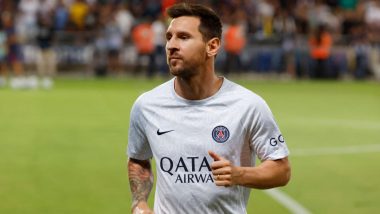 Lionel Messi has been left out of a list of nominees for the Ballon d'Or 2022 award. Yes, you have read that right. France Football, on August 12, named its 30-man shortlist for the Ballon d'Or 2022 award and Messi, being one of the top stars of the sport globally, missed the nomination for the very first time since 2005. Interestingly, Lionel Messi was the reigning Ballon d'Or champion after having won the trophy last year for his Copa America-winning exploits for Argentina. Not just Messi but his PSG teammate Neymar also was not included in the shortlist. Yashin Trophy 2022: Thibaut Courtois, Alisson Becker Among 10 Players Nominated For Annual Award

Messi's exclusion from the 30-man Ballon d'Or shortlist is understandable, given the fact that he had a pretty underwhelming season at Paris Saint-Germain. After securing a sensational move from Barcelona, Messi failed to hit the strings in France and despite his club winning the Ligue 1 title, the Argentine failed big time to live up to the expectations at Parc des Princes. Messi could score a mere 11 goals and 15 assists across competitions for PSG last season.

Meanwhile, Karim Benzema, one of the hot favourites to clinch his maiden Ballon d'Or title, was included in the 30-man shortlist. Messi's footballing rival Cristiano Ronaldo too has found a space in the nomination after scoring the highest number of goals for Manchester United on his return to the club last term. The list also included the likes of Kylian Mbappe, Robert Lewandowski, Mohamed Salah, Erling Haaland, Harry Kane, and Kevin de Bruyne among others.

(The above story first appeared on LatestLY on Aug 13, 2022 08:44 AM IST. For more news and updates on politics, world, sports, entertainment and lifestyle, log on to our website latestly.com).