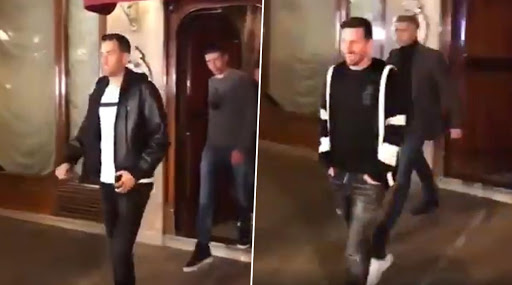 New Barcelona manager Quique Setien organized a team dinner on Thursday night where he invited the entire team and the staff ahead of their La Liga clash with Granada on January 19, 2020 (Sunday). The dinner was held in a restaurant in the upper area of Barcelona where the entire squad met. The entire first team was present at the vent with the exception of Luis Suarez, who was missing as had recently undergone knee surgery. According to sources youth academy player Riqui Puig, was also present which could mean that he could be called up for this weekend clash. Barcelona Transfer News Update: Jean-Clair Todibo Joins Bundesliga Side Schalke on Loan Until End of Season.

Newly appointed Barcelona head coach Quique Setien held a team dinner where he invited the entire squad and the staff members. Lionel Messi, Gerard Pique, Antoine Griezmann were all present for the dinner along with some youth academy players such as Riqui Puig and Ansu Fati. Luis Suarez and Ousmane Dembele missed out on the event as they are currently out injured. The reasons for the dinner are still unknown but it could have been for the new manager and the players to get to know each other before they start the second half of their campaign. Lionel Messi Picks Girona Defender Pablo Maffeo As Toughest Man-Marker He Has Faced.

Barca players at the dinner organized by Setien pic.twitter.com/ZuKo3w2LPv

🚨 — The entire Barça squad is having dinner at a restaurant in Barcelona. Quique Setién was the one who organised it. [@albert_roge] pic.twitter.com/mPMm7TOIYx

🔷 The only one absent at dinner was Luis Suárez pic.twitter.com/WqPEvNqscP

Quique Setien was announced a new manager of the Catalan club following the sacking of Ernesto Valverde earlier in the week. The 61-year-old has had very little time to get his team ready for the game but he is working hard with the players, it was reported that the Barcelona squad will train the entire week even on the matchday. Barcelona face Granada on Sunday at Camp Nou and Setien will be hoping to get to a perfect start with a win at home.