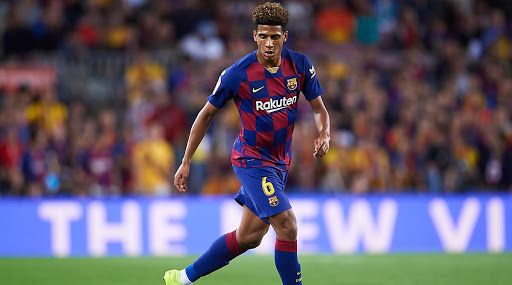 Barcelona defender Jean-Clair Todibo has joined Bundesliga side Schalke on loan until the end of the 201-20 season. The German club will pay a fee of 1.5 million euros to get the Frenchman on lean and have an option to buy once the campaign concludes for 25 million euros plus 5 million in add-ons. The 20-year-old joined the reigning Spanish champions in January 2019 but will move to Germany this month. Barcelona believes that the defender can develop in Bundesliga thus have included a buy-back clause in the deal and can sign him for 50 million euros. Lionel Messi Picks Girona Defender Pablo Maffeo As Toughest Man-Marker He Has Faced.

Barcelona in an official announcement confirmed the loan of Todibo to German heavyweights Schalke until the end of the season. The 20-year-old joined from Toulouse in January 2019 but has failed to nail down a regular place in the starting XI with the likes of Gerard Pique, Clement Lenglet and Samuel Umtiti limiting his minutes. Since making his debut on April 15, 2019, against Huesca the defender has managed to make just five appearances for the Catalan giants. Lionel Messi vs Cristiano Ronaldo: Barcelona Star Opens Up on His Rivalry With CR7.

Agreement with @s04 for the loan of @jctodibo

Italian giants AC Milan were also interested in Jean-Clair Todibo but the German team will be happy to secure the deal. Schalke coach David Wagner said that even though Todibo is a defender by trait, the current injury crisis at the club may see him feature in the midfield. The Royal Blues are currently fifth in Bundesliga, level on points with fourth-placed rivals Borussia Dortmund and hope that Todibo could help them secure a place in next year’s Champions League.