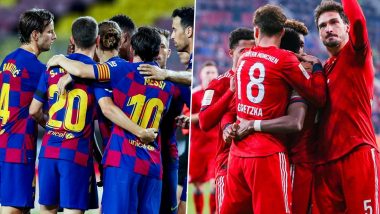 Barcelona and Bayern Munich are here to play the quarter-final match of the Champions League 2019-20. The Catalans are facing their toughest opponents so far in the season. All eyes will be set on Robert Lewandowski and Lionel Messi who are the stalwarts from their respective teams. The two have not come against each other for the last five years. The two teams have met each other on 10 occasions and in European competition. The German side leads the head-to-head record as they have won six games. At the moment the Bundesliga 2019-20 champions look unstoppable. The Catalans have won a couple of games and then the remaining ones have ended with a draw. Now let's have a head-to-head record of the two teams below:

This was one of the occasions where the German side walked away with a 3-2 win with Medhi Benatia, Robert Lewandowski and Thomas Muller scoring one goal each for their side. Neymar Jr has scored a couple of goals in that game.

This time it was Lionel Messi who had scored a couple of goals in the Caamp Nou. A goal from Neymar Jr put the team on 3-0 win. The home team walked away with a win in the first leg of the tournament.

Hosted at the Camp Nou, it was Bayern Munich who walked away with 3-0 win against the Catalans. Arjen Robben, Thomas Muller and Pique were the ones who scored a goal.

Once again the home team walked away with the last laugh as they thrashed Barcelona by 4-0. Muller scored a couple of goals. Mario Gomez scored one goal and Arjen Robben scored one goal.

The match ended with 1-1 result. Franck Ribéry from Bayern Munich and Seydou Keita from Barcelona scored one goal each. The game was quite an exciting one as the Barcelona player brought the equaliser.

Talking about the match today, the game will start at 12.30 am IST. Stay tuned to the page as we bring to you the live streaming details of the match which will be held later tonight.

(The above story first appeared on LatestLY on Aug 14, 2020 04:19 PM IST. For more news and updates on politics, world, sports, entertainment and lifestyle, log on to our website latestly.com).