Barcelona currently have six points from four matches while Benfica have five. A win for Barcelona would see them through to the last-16 stage without any difficulty while a draw or even a defeat can make things interesting in this group. Benfica would aim to do a double over the Catalan giants after their 3-0 win earlier this season. 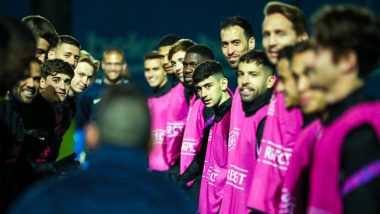 Barcelona take on Benfica in a crucial Group E Champions League 2021-22 fixture at the Camp Nou on Wednesday, November 24. The match would begin at 1:30 am IST (Indian Standard Time). The beginning of the Xavi era in Barcelona saw a good start with the La Liga giants defeating Espanyol in the first match. However, this time, they are in for a stern test against Jorge Jesus's side, who defeated them convincingly by a 0-3 margin back when these two sides faced each other in September this year. Darwin Nunez scored a brace while Rafa Silva added a third goal as Barcelona were completely outplayed on the night. However, they have a different manager to lead them this time and the Catalan faithful would hope that Barcelona reigns supreme at the Camp Nou. A win would guarantee them a place in the last 16 while a draw or a defeat could put that in jeopardy. Barcelona however would have both Sergino Dest and Ousmane Dembele fit for this match. Barcelona Head Coach Xavi Refutes Rumours of Sergio Aguero’s Retirement, Argentine Striker ‘Positive’ in Recovery

Barcelona's next game is against a strong resilient Bayern Munich side and Xavi would want his men to ensure their fate in this match itself, not leaving things for too late. Striker Memphis Depay would once again be a key player as Barcelona hope to enter the last 16 of this year's Champions League.

The Barcelona vs Benfica clash in UEFA Champions League 2021-22 will be played at the Camp Nou on November 24, 2021 (Wednesday). The game has a scheduled time of 1:30 am IST (Indian Standard Time).

Where To Watch Live Telecast of Barcelona vs Benfica, UEFA Champions League 2021-22 Match on TV?

Sony Pictures Network are the official broadcasters of UEFA Champions League 2021-22 in India and will telecast the games live on its channels. Fans can tune into Sony Sports HD/SD channels to watch the live telecast of Barcelona vs Benfica on TV.

Sony Pictures Network’s official OTT platform Sony LIV will be streaming the game live for its fans in India. You can tune into the Sony Liv app or website to watch Barcelona vs Benfica, UEFA Champions League 2021-22 live streaming online. JioTV would also provide live streaming for this match.

(The above story first appeared on LatestLY on Nov 23, 2021 07:41 PM IST. For more news and updates on politics, world, sports, entertainment and lifestyle, log on to our website latestly.com).