Bayern Munich dealt a huge blow to their title defense aspirations after striker Robert Lewandowski was ruled out with a knee injury. Corentin Tolisso and Douglas Costa are also unavailable while Serge Gnabry tested positive for COVID-19. PSG’s Marco Verratti and Alessanro Florenzi are also in self-isolation after testing positive. 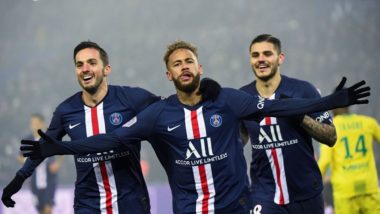 Bayern Munich will look to extend its unbeaten streak in the UEFA Champions League 2020-21 when they host Paris Saint-Germain in the first leg of the UCL quarter-finals. BAY vs PSG match in UCL quarter-finals will be played at the Allianz Arena in Germany. Hansi Flick’s Bayern are unbeaten in 19 matches in the competition and can become the second team after Manchester United to win 20 or more games in the Champions League. This meeting will be the repeat of last year’s UCL final which Bayern won 1-0 to win the tournament for the sixth time. Meanwhile, Dream11 fantasy fans searching for all tips and predictions to pick the best fantasy XI for the BAY vs PSG match should scroll down for all information. Jude Bellingham Reacts After His Goal Was Called Off Against Manchester City During UCL 2021 Match.

The defending champions dealt a huge blow to their aspirations of retaining the UCL title after striker Robert Lewandowski was ruled out with a knee injury. Corentin Tolisso and Douglas Costa are also unavailable for the hosts while Serge Gnabry tested positive for COVID-19 and is in quarantine. PSG’s Marco Verratti and Alessanro Florenzi are also in self-isolation after testing positive. Bayern Munich vs PSG, UCL 2020–21 Quarter-Final Live Streaming Online: Where To Watch UEFA Champions League Match Live Telecast on TV.

BAY vs PSG, UCL 2020-21, Dream11 Team Prediction: Goalkeeper – We will pick Manuel Neuer (BAY) as the goalkeeper for this Dream11 team.

We will make Neymar (PSG) as the captain for this Dream11 fantasy team while Kylian Mbappe (PSG) should be picked as the vice-captain for the Bayern Munich vs Paris Saint-Germain match.

(The above story first appeared on LatestLY on Apr 07, 2021 07:00 PM IST. For more news and updates on politics, world, sports, entertainment and lifestyle, log on to our website latestly.com).