Jude Bellingham Reacts After His Goal Was Called Off Against Manchester City During UCL 2021 Match, Borussia Dortmund Baffled (Check Reactions)

Jude Bellingham was quite gutted after his goal against Manchester City in UCL 2020-21 was ruled out by the referee. He took to social media and posted a series of tweets expressing his disappointment. Even the official account of Borussia Dortmund took to social media and they too were quite baffled with the decision of the referee Ovidiu Hategan. 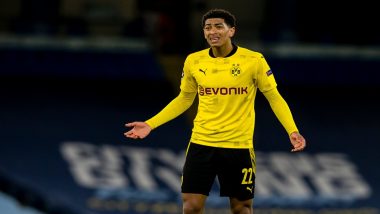 The decision could not be overturned by VAR as the referee had already blown a whistle even before the ball could go past the goal. This was quite an insult to the visiting team. The replays clearly showed that Borussia Dortmund had scored a goal but it was called off. Now, the incident didn't go down well with the team and they were quite baffled by the decision. Jadon Sancho had already reacted to it and now, Borussia Dortmund also looked quite angry with the decision.

The team also expressed their disappointment with a few words below after the match:

Felt like we should’ve came away with more, but we return home with an important away goal ⏹ pic.twitter.com/zpoWAuY1Ck

The second leg of the match is supposed to happen on April 15, 2021. This time the game will be hosted at the Signal Iduna Park, i.e. at the backyard of Borussia Dortmund.

(The above story first appeared on LatestLY on Apr 07, 2021 01:20 PM IST. For more news and updates on politics, world, sports, entertainment and lifestyle, log on to our website latestly.com).