Although it can be said that both teams aren't in contention for a place in the top four, a win in this match can bring them back in the equation. The match starts at 7:30 pm IST and would be played at the Athletic Stadium in Bambolim. 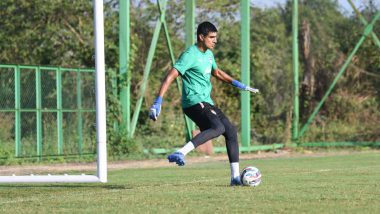 Bengaluru FC would face FC Goa in an Indian Super League 2021-22 encounter on Sunday, January 23. The match would be played at the Athletic Stadium in Bambolim and is set to begin at 7:30 pm IST (Indian Standard Time). Both sides are locked on with the same number of points (13) and are in search of a victory. Bengaluru FC would be more confident of the two sides, having beaten defending champions Mumbai City FC in their last match, although it came 13 days ago. Their recent fixture against ATK Mohun Bagan got postponed and it would be interesting to see whether they can maintain that intensity after a long gap. Everton Fans Throw Bottle At Aston Villa Players Lucas Digne and Matty Cash, During Their Premier League Clash (Watch Video)

FC Goa on the other hand, fell to a defeat to SC East Bengal in their last game, giving the Red and Golds their only win of the competition so far. Bengaluru are undefeated for the last five matches while Goa have won just once in the same number of games. Based on form, Bengaluru FC are favourites to clinch the win but FC Goa can spring a surprise and return to winning ways. Let us take a look at the live streaming details of the game.

The Bengaluru FC vs FC Goa match in ISL 2021-22 will be played at the Athletic Stadium in Bambolim. The match will take place on January 23, 2022 (Sunday) and it is scheduled to begin at 07:30 pm IST (Indian Standard Time).

Where to Get Free Live Streaming Online of Bengaluru FC vs FC Goa, ISL 2021–22 Football Match?

Fans can also watch Bengaluru FC vs FC Goa match online. Since Star Sports network is the official broadcaster of ISL 2021-22, Disney+Hotstar will be live streaming the BFC vs FCG clash online for fans. JIO and Airtel subscribers can also follow the match on JIO TV and XStream.

(The above story first appeared on LatestLY on Jan 23, 2022 05:13 PM IST. For more news and updates on politics, world, sports, entertainment and lifestyle, log on to our website latestly.com).