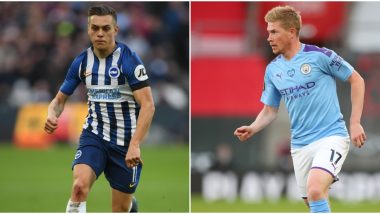 Manchester City will hope to carry their home form on the road when they face Brighton in Premier League 2019-20 on Saturday. City are on a losing streak of three away matches in the Premier League and were beaten 0-1 by a 12th ranked Southampton in their last away league fixture. City have, however, never lost to Brighton in their Premier League history and have beaten the Seagulls all five times they have met. Brighton have also been poor at home this season and have lost both of their last two home matches. Meanwhile, fans searching for all the tips and team suggestions to pick the right team for the Brighton vs Manchester City match, please scroll down. Champions League 2019-20 Draw: Manchester City Could Face Juventus in Quarters, Barcelona vs Bayern Munich on Cards.

This is the first time City manager Pep Guardiola have lost three successive games on the road in his managerial career and will hope the record does not get worse at Brighton. City have also scored only thrice in their last six away games and have drawn blanks in their last three away matches.

Manchester City are still without striker Sergio Aguero but have no other injury concerns. Brighton, on the other, are missing Jose Izquierdo and Steven Alzate.

Brighton vs Manchester City, Premier League 2019-20, Dream11 Team Prediction: Forwards – Raheem Sterling (MCI) and Neal Maupay (BHA) will be the other forwards in this side.

(The above story first appeared on LatestLY on Jul 11, 2020 04:18 PM IST. For more news and updates on politics, world, sports, entertainment and lifestyle, log on to our website latestly.com).