The 23-year old, who is also the first signing for Dortmund under new manager Marco Rose, has been named in Switzerland's squad for the upcoming Euros. He was bought with a transfer fee of 15 million euros, which makes him the second most expensive goalkeeper in the Bundesliga, after Bayern great Manuel Neuer. 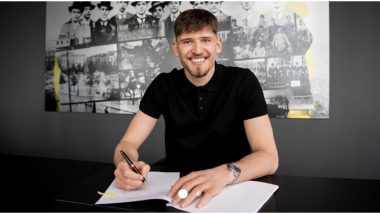 Swiss goalkeeper Gregor Kobel has joined Borussia Dortmund from VFB Stuttgart on a five-year contract, as confirmed by the Bundesliga club on Monday. The 23-year old, who is also the first signing for Dortmund under new manager Marco Rose, has been named in Switzerland's squad for the upcoming Euros. Speaking to Dortmund's official website, Kobel said, "Borussia Dortmund is one of the largest and most famous football clubs in the world." Top Goalkeepers from 2020/21 Season of Bundesliga, Serie A, La Liga, Ligue 1 and EPL: From Mike Maignan to Jan Oblak, Here’s a List of Golden Glove Award Winners Across Europe’s Top Five Leagues

"A club that claims to fight for the championship title and the DFB Cup every year and to play in the Champions League. It makes me proud to play for BVB. I would like to contribute my part to the future Dortmund success," he added further. Borussia Dortmund took to Twitter to announce the signing.

Dortmund is said to have paid a fee of around 15 million euros to secure the Swissman's signature, who is set to become their first choice keeper for the next season. He is also the second most expensive goalkeeper in the Bundesliga, after Bayern great Manuel Neuer, who had joined the German giants for 30 million euros, back in 2011.

Kobel had joined Stuttgart from Hoffenheim in 2019 and he played a crucial role in his side securing a ninth-place finish this season. However, this signing means that fellow Swissman Roman Bürki would now be sold by Dortmund in the summer. Dortmund also has Marwin Hitz, another Swissman, who would be their second choice keeper for next season.

(The above story first appeared on LatestLY on May 31, 2021 09:22 PM IST. For more news and updates on politics, world, sports, entertainment and lifestyle, log on to our website latestly.com).