Brazil Squad for 2018 FIFA World Cup in Russia: Selecao Lineup, Team Details, Road to Qualification & Players to Watch Out For in Football WC

Road to FIFA World Cup 2018: Brazil was the first nation to qualify for the 2018 FIFA World Cup as they topped the South American World Cup Qualifiers winning 12 out of the 18 matches they played gathering 41 points. 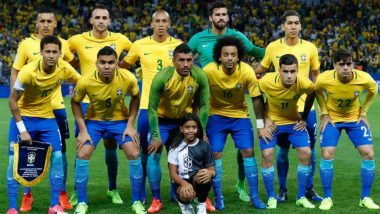 Five times champions Brazil head into the FIFA World Cup 2018 in Russia in a pretty confident mood as the team has been rejuvenated since the arrival of coach Tite in 2016. Be it the qualification stage or the International friendlies, Brazil have been steamrolling their oppositions with some dazzling football. The reason for the revival of Brazil in the past has been the balance on a pitch that Tite has brought for Brazil. A mix crop of young and experienced players have been part of the core group for Brazil for the past two years, and several players are gunning for the starting eleven in Russia. Selecao placed in Group E with Switzerland, Costa Rica and Serbia have announced their 23-man World Cup squad including a recuperating Neymar. FIFA World Cup 2018 Schedule in IST for PDF Download: Fixtures, Groups, Time Table with Match Timings & Venue Details of Football WC in Russia.

Starting with defense, the quartet of Marcelo, Dani Alves, Miranda and Marquinhos have cemented their places in the back four and Tite will have Alex Sandro and Thiago Silva as a quite capable cover. The midfield looks formidable with Philip Coutinho, Paulinho and Willian as the attacking force with Casemiro protecting the back four as he has done throughout the season with Real Madrid. Paulinho who has come back into the European fray with Barcelona should provide the energy and goals from the middle of the park for Brazil. The Selecao is also blessed with goalkeepers who are in the form of their life in Alisson Becker and Ederson. The duo is important to Tite in his bid to get back the cup to Brazil after a gap of 16 years.

The fitness of Neymar though is a burning question with the PSG forwards ankle injury meaning he has missed the majority of the footballing action in 2018. Although he has returned to Paris to begin his light training sessions, Brazil have two very capable options in Roberto Firminio and Gabriel Jesus. Jesus was the top scorer in qualification for Brazil and can step up in the absence of Neymar if he deemed unworthy of a start in Russia.

Brazil was the first nation to qualify for the 2018 FIFA World Cup as they topped the South American World Cup Qualifiers winning 12 out of the 18 matches they played gathering 41 points. The only side to overcome Brazil was Chile who defeated them 2-0 at the initial stages of the qualifiers. The resulted though was part of a faltering reign of Dunga who was removed from the job in 2016 in favour of Tite. After that, there was no looking back for Brazil as they defeated one nation after another. They turnaround in fortunes was completed when in the last game of the campaign with a win over Chile to knock them out of the World Cup.

Brazil was thumped by Germany in the semi-finals of the 2014 World Cup by a margin of 1-7 and the humiliation was compounded when they lost the third-place match 0-3 to the Netherlands. There were a couple of close encounters with Chile and Colombia which they did manage to overcome but in all a disappointing tournament for the Selecao.

Neymar: The PSG forward is slowly and steadily building up his fitness, and his presence gives a massive lift to the entire squad who look up to him for those moments of magic. He may not start in the group stages, but the knockout games should provide Neymar with the opportunity to showcase his talent. He missed the demolition at the hands of Germany in the last World Cup semi-final and hence would be raring to go for his nation.

Marquinhos: He is the wall for Brazil and has been ever-present throughout the qualification campaign. The PSG defender reads the game exceptionally well and is clever with his passing. His partnership with Miranda has borne fruit with the pair bringing the stability to the back which was missing during the 2014 World Cup and its subsequent years.

Brazil will play Switzerland on June 17 in their first match of FIFA World Cup 2018 in Russia. They will next take on Costa Rica on June 22 and Serbia on June 27 in the remaining of group-stage matches. Brazil will be taking on Austria on June 10 in their final warm-up game before they step on the Russian soil.

(The above story first appeared on LatestLY on May 17, 2018 09:07 AM IST. For more news and updates on politics, world, sports, entertainment and lifestyle, log on to our website latestly.com).