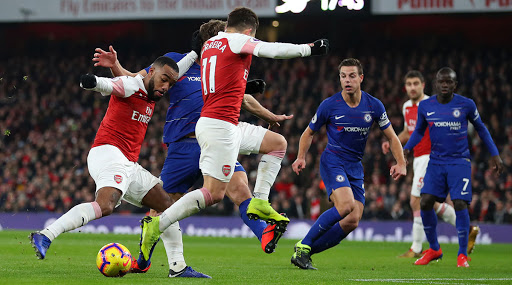 Chelsea vs Arsenal, Premier League 2019-20 Free Online Live Streaming & Live Telecast: There is a massive midweek London derby in the English Premier League as Chelsea play host to 10th ranked Arsenal. Frank Lampard’s Chelsea lost courtesy a last-minute winner against Newcastle United but the failure of other top 4 race contenders meant there was not much damage done. A win tonight against Arsenal should see the Blues go 8 points clear of Manchester United in the fourth place which should give some breathing space. Opponents Gunners, on the other hand, have managed just a single win in their last five encounters which has put new manager Mikel Arteta under a bit of pressure. The Spanish gaffer has already lost to Chelsea a few weeks ago and cannot afford to drop points again. Meanwhile, for live telecast, online live streaming and live score updates of Chelsea vs Arsenal, Premier League 2019-20 clash, please scroll down. CHE vs ARS Dream11 Prediction in Premier League 2019–20.

Recce James is expected to be fit despite limping off in the game against Magpies for Chelsea and should start. Tammy Abraham could be flanked by Willian and Callum Hudson-Odoi in the attacking third with Christian Pullisic still out for a few weeks. N’Golo Kante and Jorginho have an all-important job of making Chelsea tick particularly against an Arsenal side that can boss possession away from home. Mason Mount could be relegated to the bench in favour of the more defensively astute Matteo Kovacic. Edinson Cavani Transfer News: PSG Forward's Desire to Leave French Club Sparks Interest form Chelsea Boss Frank Lampard.

Star striker Pierre Emerick Aubameyang is unavailable again due to suspension with Alexandre Lacazette expected to play down the middle for the visitors. Mesut Ozil has divided opinions under manager Mikel Arteta but the Spaniard trusts the 2014 World Cup winner in the no 10 role. Granit Xhaka and Lucas Torreira are inconsistent but on their day could stifle the best of league teams in the middle of the park.

Chelsea vs Arsenal clash in Premier League 2019-20 will be played at Stamford Bridge on January 22, 2020 (Wednesday) as per Indian time. CHE vs ARS encounter is scheduled to start at 01:45 am IST (Indian Standard Time).

Where to Watch the Live Telecast of Chelsea vs Arsenal, Premier League 2019/20 Season Football Match? TV Channels in India

Hotstar, the official online streaming media of Star Network, will be live streaming the Chelsea vs Arsenal league match for its online fans in India. Meanwhile, fans can also follow LatestLY for the live score updates of CHE vs ARS clash in the 2019-20 Premier League. Arsenal have not won in their last 7 league games against Chelsea away from home and tonight it is going to be no different with the Blues securing a win.