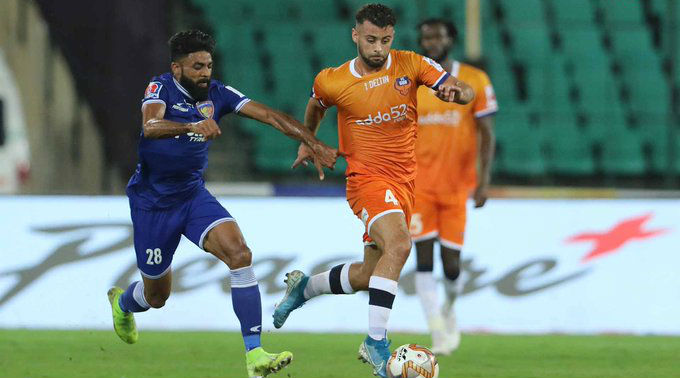 Chennaiyin FC will be looking to continue their fairytale run in the Indian Super League 2019-20 when it takes on FC Goa in the first leg of their semi-final clash. The Owen Coyle led side looked dead and buried at one stage of the tournament only to show life when it mattered most. A string of inspiring victories saw them make it the next round, which will forever be etched in the memories of their supporters. Opponents FC Goa have been the attacking geniuses of the 2019/20 season, steamrolling over the majority of the sides. Only ATK has been able to match their consistency somewhat in terms of victories. Despite losing their manager in January, the Gaurs have let very little come in their path for excellence. Chennaiyin FC Vs FC Goa - Live Football Score, Semi-Final 1 - 1st Leg.

With players like Nerijus Valskis and Rafael Crivellaro in the form of their lives, Chennaiyin have managed 21 goals in their last eight games which includes six wins. Anirudh Thapa and Edwin Vanspaul have dominated play in midfield, creating a host of chances for their front players. Their only concern at the moment is whether or not Andre Schembri participates in the game having picked up an injury against Mumbai City FC.

Interim coach Clifford Miranda has continued the philosophy put in place by former boss Sergio Lobera. With skipper Ferran Corominas firing on all cylinders coupled with the inspiring Brandon Fernandes, Goa can tear apart oppositions in a short span of time. The defence can be an issue for them with the side susceptible to counter due to their style of play. This is where players like Mourtada Fall have to step up a bit to keep Chennaiyin FC at bay.

The Indian Super League (ISL) 2019-20 semi-final leg 1 between Chennaiyin FC and FC Goa will be played at the Jawaharlal Nehru Stadium in Chennai. CFC vs FCG match is scheduled to start at 07:30 pm IST (Indian Standard Time).

Live-action of Chennaiyin FC Vs FC Goa match will also be available of online platforms. Hotstar, the official online media streaming site of Star Network, will be live streaming the CFC vs FCG match for its online fans in India. Meanwhile, fans can also follow LatestLY for the live score updates of CFC vs FCG ISL 2019-20 encounter. Both sides will likely score, and they might remain inseparable post the 90 minutes of football this evening.