Cristiano Ronaldo and Other Juventus Players in Isolation After Two COVID-19 Positive Cases, Serie A 2020–21 Match Against Napoli Doubtful 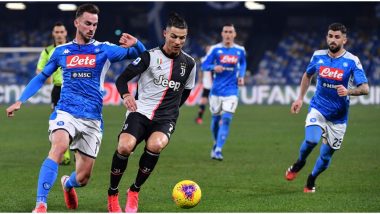 Juventus have announced they will play the Serie A 2020-21 match against Napoli despite the player going into isolation after two members of the club tested COVID-19 positive on Saturday. The Italian champions are scheduled to host Napoli in the Serie A on October 5, 2020 (Monday) but two positive cases in the club have thrown the match under caution with Napoli also facing the same issue after two of their club members tested positive for COVID-19 just two days before the squad was set to travel to Turin for the Juventus vs Napoli Serie A match. Andrea Pirlo Praises Cristiano Ronaldo Ahead of Juventus vs Napoli, Serie A 2020, Says ‘He Is The First One To Arrive & Last One to Leave the Training’.

The defending champions had earlier confirmed that the entire team have been sent into isolation after two staff members of the club tested positive for the Coronavirus. The club also confirmed that those returning with COVID-19 positive results were “neither players nor members of the technical or medical staff.” But as per the regulations and the protocol, the entire team had gone into isolation. Cristiano Ronaldo Trains Hard for Juventus’ Next Serie A 2020–21 Match Against Napoli, Shares Thoughtful Post on Social Media.

“This procedure will allow all members who tested negative to the controls to carry out regular training and match activities, but will not be allowed contact with outside the group,” the club stated in the statement. "The club is in constant contact with the competent health authorities."

But hours later the club in a separate statement announced that the players will take the field for the match against Napoli as per schedule. “Juventus Football Club announces that the First Team will take to the field for the Juventus - Napoli match tomorrow at 20:45, as foreseen by the Serie A League calendar,” the tweet from the official handle of the club read.

Juventus Football Club announces that the First Team will take to the field for the Juventus - Napoli match tomorrow at 20:45, as foreseen by the Serie A League calendar.

The match, however, remains a doubt from taking place after reports emerged that the Napoli team have been prevented from travelling to Turin for the Serie A 2020-21 clash against Juventus by the local health authorities who fear it could spark another coronavirus outbreak. Two members of Napoli, including Poland midfielder Piotr Zielinski, tested positive and there are fears of an outbreak of the virus in the squad.

With Juventus ready to host the game despite the positive cases, Napoli face a danger of conceding the game 3-0 if they fail to turn up at Turin for the clash. If Napoli does not take the field, they will forfeit the game 3-0. Napoli are currently second in the Serie A points table and have won both of their matches in the new season while Juventus are placed seventh after drawing and winning one each from their two games.

(The above story first appeared on LatestLY on Oct 04, 2020 11:09 AM IST. For more news and updates on politics, world, sports, entertainment and lifestyle, log on to our website latestly.com).