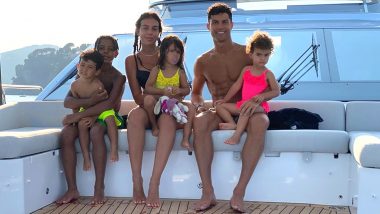 Cristiano Ronaldo has enjoyed a stellar campaign and on Sunday, the Portuguese superstar led Juventus to yet another Serie A title. The 35-year-old scored the opening goal against Sampdoria, as the Bianconeri ran out 2-0 winners at the Allianz Stadium to secure their ninth consecutive domestic league crown. Following a demanding season, Ronaldo is now relaxing with his family on a yacht. Here’s How Cristiano Ronaldo and Other Juventus Players Celebrated Ninth Serie A Title in a Row (Watch Photos and Videos).

Cristiano Ronaldo has scored 30+ goals on the way of lifting his second Serie A crown. The Portuguese has scored more goals than any other football player since the turn of the year and after a challenging campaign, in which he broke several records, the five-time Ballon d’Or winner is now celebrating his on-field exploits with his family. Danilo Luiz at Par With Cristiano Ronaldo! Juventus Defender Forces FIFA to Delete Tweet After ‘Record League Wins’ Goof-up (View Deleted Post).

The 35-year-old shared a photo of him letting his hair down and relaxing on a yacht with girlfriend Georgina Rodriguez and his kids while he looks back on a successful season until now and gears up for the upcoming challenge. ‘LA FAMIGLIA CAMPIONE! Nothing better than celebrate your victories with the ones you love’ Cristiano captioned his post.

LA FAMIGLIA CAMPIONE!🥇❤️💪🏼 Nothing better than celebrate your victories with the ones you love🙏😘

The 35-year-old will return back onto the field in August when Juventus begin their quest for European glory. The Black & Whites, trail 1-0 to Lyon after a narrow defeat in the first leg of the Round of 16 and will be looking to overturn the deficit.

Juventus last won the Champions League in 1995-96 season but will have high hopes of lifting the coveted trophy this time around. With Cristiano Ronaldo – a five-time UCL winner – in fine form, the Bianconeri are looking as one of the favourites.

(The above story first appeared on LatestLY on Jul 28, 2020 10:27 AM IST. For more news and updates on politics, world, sports, entertainment and lifestyle, log on to our website latestly.com).