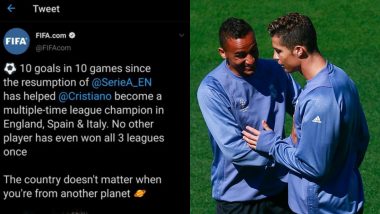 Juventus lifted the Serie A title for record 36th time following 2-0 win over Sampdoria. It was Juventus' ninth consecutive Serie A title win. Cristiano Ronaldo and Federico Bernardeschi were the ones who netted for Juventus. Following Juventus' win FIFA congratulated Ronaldo for a 'unique feat', which wasn't the case. FIFA in their tweet mentioned that no other player apart from Ronaldo has won all three leagues once. The tweet was, however, deleted later following Ronaldo's teammate and Juventus defender Danilo Luiz puzzled reaction. Juventus Secure Ninth Straight Serie A Title Following 2–0 Over Sampdoria (Watch Goal Highlights).

"10 goals in 10 games since the resumption of @SerieA_EN has helped @Cristiano become a multiple-time league champion in England, Spain & Italy. No other player has even won all 3 leagues once. The country doesn't matter when you're from another planet," FIFA wrote in the deleted tweet.

FIFA were referring to Ronaldo's three Premier League titles with Manchester United in 2007, 2008 and 2009, La Liga title wins with Real Madrid in 2012 and 2017 and Serie A championship win in 2019 and now 2020. Juventus Transfer News Update: Bianconeri Offer Aaron Ramsey to Chelsea in Jorginho Swap Deal.

FIFA deleted their tweet after Danilo quoted them lmao pic.twitter.com/CRNFcciuiE

FIFA were factually incorrect and before they could delete the tweet Danilo, who actually happens to be the other player to have won all multiple titles in England, Spain and Italy, retweeted the post with four thinking emoticons.

For the uninitiated, before adding Serie A title win to his list of winners, Danilo won Primeira Liga twice with Porto in 2012 and 2013, La Liga with Real Madrid in 2017, and Premier League with Manchester City in 2018 and 2019.

(The above story first appeared on LatestLY on Jul 27, 2020 11:43 PM IST. For more news and updates on politics, world, sports, entertainment and lifestyle, log on to our website latestly.com).