Cristiano Renaldo became the fastest player to reach the 100-goal mark for Juventus, achieving the landmark milestone in just 131 appearances and becoming the first player in the Italian club’s history to net a century of goals in less than three seasons. 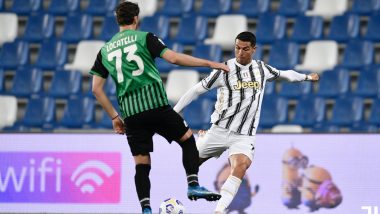 Cristiano Ronaldo once again created history for Juventus as he netted in the 3-1 victory over Sassuolo on Wednesday. The Portuguese star netted his 100th goal for the club as he managed to get himself on the score-sheet just before half-time as Andrea Pirlo’s men still remain in contention for Champions League qualification heading into the final stretch of the season. Cristiano Ronaldo, Paulo Dybala Score 100th Goal To Keep Bianconeri in Top-Four Race (Watch Goal Highlights).

With his strike against Roberto de Zerbi’s men, Cristiano Renaldo became the fastest player to reach the 100-goal mark for Juventus, achieving the landmark milestone in just 131 appearances and becoming the first player in the Italian club’s history to net a century of goals in less than three seasons.

Prior to Wednesday, only Omar Sivori and Roberto Baggio had required less than five seasons to reach the 100-goal mark. However, Cristiano Ronaldo surpassed the two, reaching the landmark in just less than three seasons having joined the Bianconeri in 2018-19 from Real Madrid on a record transfer fee.

100 - Cristiano #Ronaldo has just become the first player in the history of Juventus to have scored 100+ goals in all competitions in his first three campaigns for the Bianconeri. Legend.#SassuoloJuve #SerieA pic.twitter.com/1U2QK0YJO8

With his strike against Sassuolo, the five-time Ballon d’Or winner became the first player in history to score more than 100 goals with three different clubs and his national team, having achieved the feat first with Manchester United (118 goals) than Real Madrid (450 goals) followed by Portugal (103 goals).

Cristiano Ronaldo has now scored 100+ goals for three clubs AND his country 👑 pic.twitter.com/fLCn9a0vYU

Cristiano Ronaldo’s contract with Juventus expires next season and at the moment there are no talks about his renewal as there is uncertainty over the Portuguese star’s future at the club following an underwhelming campaign as this season saw the Bianconeri unable to defend the league title for the first time in 10 years and battling for Champions League qualification.

(The above story first appeared on LatestLY on May 13, 2021 10:30 AM IST. For more news and updates on politics, world, sports, entertainment and lifestyle, log on to our website latestly.com).