Liverpool brutally battered Cristiano Ronaldo’s Manchester United in the EPL 2021-22 match as they won 5-0 at the Old Trafford. Mohmed Salah scored a hat-trick and humiliated Manchester United. With this, the team was thrashed badly. During the match. Ronaldo was seen mocking Ole Gunnar Solskjaer but enacting his gestures. 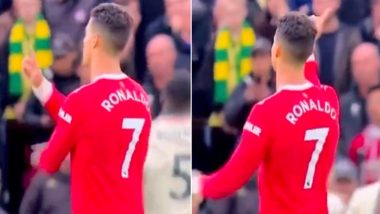 In the video, we see Cristiano Ronaldo furiously imitating Ole Gunnar Solskjaer's gestures. Ole was at the sidelines and was constantly guiding the team by making a few gestures with his hands vigorously. Clearly, none of his strategies worked and Manchester United continued to be at the receiving end. This did not go down well with Cristiano Ronaldo and he was seen mocking Ole. Check out the video below.

Just as Manchester United lost the match, the fans started trending #OleOut on social media. Talking about the match, the visitors had an upper hand in the match right from the start. Within the first five minutes of the match, Naby Keita scored a goal. Diogo Jota netted another one at the 13th minute of the match. Soon within the first 15 minutes of the game, Liverpool was on 2-0 and the fans hoped that the team could make a comeback. Salah added a couple of more goals by half-time and took the team to 4-0.

(The above story first appeared on LatestLY on Oct 27, 2021 08:30 PM IST. For more news and updates on politics, world, sports, entertainment and lifestyle, log on to our website latestly.com).