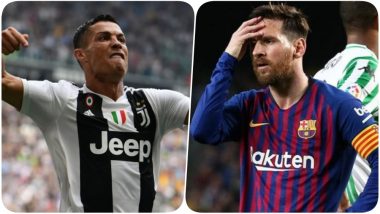 Winning six Ballon d'Or so far in his career Lionel Messi has surely opened up the rivalry with Cristiano Ronaldo who has won five gongs. However, as per the new rankings, shared by Goal.com, it is the Portugal star who is more likely to win the gong. Goal.com produces rankings every week where the rankings of the 20 players change according to their performances. The Barcelona captain might be inching closer to the mark of 700 career goals, but Messi has particularly not had a great season so far as per his standards. Cristiano Ronaldo vs Lionel Messi: Bhuvneshwar Kumar Makes a Pick Between the Two Football Stalwarts.

The Argentine has scored 21 goals in 27 appearances, Lionel Messi has slipped to number four of the rankings by Goal.com and Cristiano Ronaldo remains on number two with the kind of performance he has put up recently. After the comeback of the Serie A 2019-20, Ronaldo has scored in both Serie A games and brought Juventus closer to winning the title. If Juventus wins the Serie A title once again, it is very likely that the Portugal star can pick his sixth Ballon d'Or.

So who is leading the rankings for the Ballon d'Or? It is the Bayern Munich star Robert Lewandowski who has been in a killer form.  The Polish footballer has equalled Cristiano Ronaldo and Lionel Messi's record of scoring more than 40goals in five consecutive seasons. The top five slots by Goal.com are occupied by names like Robert Lewandowski on number one, Cristiano Ronaldo on two. The third spot has been occupied by Kevin de Bruyne and Lionel Messi is on number four with Thomas Muller being seated on the fifth position.

(The above story first appeared on LatestLY on Jun 30, 2020 09:02 AM IST. For more news and updates on politics, world, sports, entertainment and lifestyle, log on to our website latestly.com).