The Portuguese superstar, who made a sensational return to Manchester United in the summer transfer window last month, would make a total of $125m (£91.63m) in the 2021-22 season. He has been in good form this season, netting four times in all competitions so far. 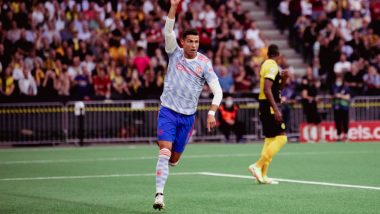 Breaking records and scripting new ones has become more of a regular thing for Cristiano Ronaldo as now, he has surpassed his rival Lionel Messi to become the highest-paid footballer in the world, according to the latest update by Forbes. The Portuguese superstar, who made a sensational return to Manchester United in the summer transfer window last month, would make a total of $125m (£91.63m) in the 2021-22 season. The five-time Ballon d'Or winner would earn a total of $70m (£51.31m) from Manchester United and Ronaldo's commercial engagements would fetch him $55m (£40.31m) in total. Messi now, with earnings of $110m (£80.63m) out of which $75m (£50m) being from his deal with newly joined club Paris Saint-Germain. Cristiano Ronaldo Scripts A Couple of Records in Premier League, Tops Shots Per Game & Shots on Target

After Ronaldo and Messi, Brazil star Neymar occupies the third spot with earnings of the 2021-22 season amounting to $95m (£69.68m). The fourth-place went to Kylian Mbappe, who would earn $43m (£31.54m) this season.  Ronaldo has been on fire this season after returning to Old Trafford, scoring four times in all competitions, while Messi is yet to find his feet in Ligue 1.

Above him are Manchester United's Paul Pogba ($34m (£24.92m) in the eighth spot and former Barcelona legend Andres Iniesta is seventh with $35m (£25.66m). The fifth and sixth spots in this list is taken up by Egypt and Liverpool star Mohamed Salah with earnings of  $41m (£30.6m) and Bayern Munich's talismanic striker Robert Lewandowski, who would earn $35m (£25.66m).

(The above story first appeared on LatestLY on Sep 22, 2021 06:06 PM IST. For more news and updates on politics, world, sports, entertainment and lifestyle, log on to our website latestly.com).