Ronaldo has been heavily rumoured to be seeking a move out of Old Trafford but the player has come out on Instagram, blasting the media for spreading fake news about his postion at the club. He also said that he will reveal details about his future in an interview. 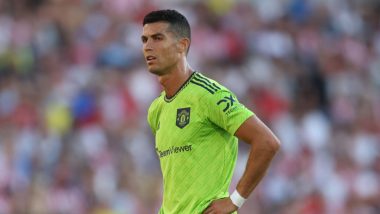 Cristiano Ronaldo has slammed the media for spreading fake news about his Manchester United future. This comes after he has been speculated to leave Manchester United for weeks and months now. Reacting to repeated reports of him leaving Manchester United this summer, the Portugal star took to Instagram to respond to a fan's post, writing, "They know the truth when they interview in a couple of weeks. The media is telling lies. I have a notebook and in the last few months of the 100 news I made, only 5 were right. Imagine how it is. Stick with that tip." Manchester United Deny Reports of Cristiano Ronaldo Contract Termination This Summer

Ronaldo's future at Manchester United has been the subject of a lot of speculation. And they all have risen up sharply after the Red Devils suffered two consecutive defeats in their opening Premier League fixtures, dumping them right to the bottom of the points table. It has been revealed that Ronaldo's reported impasse with the club has left a negative impact on the squad as the Red Devils find themselves in a spot of bother.

Manchester United have reportedly been determined to keep Ronaldo with several sources claiming that the five-time Ballon d'Or champion is seeking a way out to compete in the Champions League. There were also reports of Manchester United terminating the player's contract but those have been refuted by the club.

(The above story first appeared on LatestLY on Aug 17, 2022 09:47 AM IST. For more news and updates on politics, world, sports, entertainment and lifestyle, log on to our website latestly.com).