David Villa Accused of Sexual Harassment: Intern Who Levelled Allegations Against Former Barcelona and Spain Striker During Stint at New York City FC Opens Up on Her Ordeal at the MLS Club

Intern who had accused former Spain and Barcelona striker David Villa of sexually harassing and touching her inappropriately during their stint at Major League Soccer (MLS) club New York City FC revealed startling details about her ordeal and also opened up on her reason to speak out about the trauma she had to undergo at the football club. 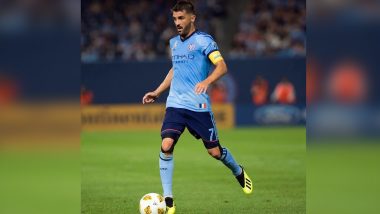 A former intern, who worked with Major League Soccer-based club New York City FC opened up on her sexual allegations against former NYCFC player and World Cup winner David Villa. Skyler Badillo, who had in July levelled allegations against Villa, recently spoke with The Athletic wherein she mentioned revealed her ordeal. Her allegations were investigated by the club who revealed they found ‘inappropriate and unacceptable’ behaviour after concluding its investigation earlier this November. ‘Dele Alli’s Sensational Catch Will Remind Fans of Ravindra Jadeja!’ Tottenham Hotspur Share Video of Footballers Playing Cricket, Twitter React.

Badillo, in her interview with The Athletic, revealed she was 20 when she had joined the New York-based MLS football club. She was part of the first-team training staff for two seasons since May 2018. Revealing her ordeal, Badilo she had to face harassment at the club, which included advances from former Spain, Barcelona and Atletico Madrid striker David Villa. The advances were ‘so frequent they were a running joke in the training room’ she revealed. Badillo also added that such a thing was only possible because the supervisors allowed it.

Revealing details about the harassment and abuse she had to endure during her two seasons at the club, Badilo alleged Villa touched her ‘inappropriately’ and also made several advances towards her. She also said she wasn’t speaking out for her own gain but came forward to help others facing similar harassment.

“If me sticking my neck out and telling my story helps one other person who was harassed by him, or at the club — or anywhere — feel even the slightest bit less alone, then it will have been worth it,” she said in the interview.

Villa had, however, denied these allegations when they first made in July. In a statement he had released then, Villa had said: "I strongly object to the accusations made about me on Twitter. These accusations are entirely false and I deny them. I repeat, these accusations are totally false. Harassment is a severe problem for many people. It dishonours those who suffer harassment for others to claim it as an excuse to make false accusations.”

"As our legal team works to address these false charges, I ask the media and the public to please respect my right to the presumption of innocence in this matter," the statement added.

The football club had opened an investigation on the matter and concluded it earlier this month following which the club in a statement revealed the allegations made were indeed true. Although the club did not name Villa. "The allegations made during the course of the investigation were that a small number of players and staff did not act in accordance with the club's standards in their interactions with the intern and with other club staff," NYCFC had said in a statement to ESPN.

"This behaviour included unnecessary physical contact, teasing, and comments regarding clothing and appearance. The club found that this behaviour was inappropriate and unacceptable."

(The above story first appeared on LatestLY on Nov 24, 2020 12:06 AM IST. For more news and updates on politics, world, sports, entertainment and lifestyle, log on to our website latestly.com).