Argentina and Poland were the two teams to make it to the FIFA World Cup 2022 Round of 16 from Group C while Mexico were eliminated despite 2-1 win over Saudi Arabia, who were knocked out as well. 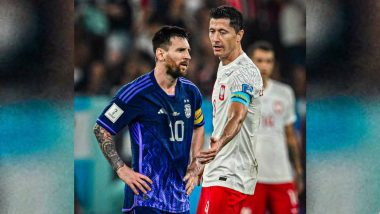 It was an intense game of football between Poland and Argentina in the FIFA World Cup 2022 Group C match. Argentina thanks to Alexis Mac Allister and Julian Alvarez's goals went on to win the game 2-0 while Lionel Messi missed the penalty. Despite losing the game, Poland went on to qualify for Round of 16 due to better goal difference than Mexico. During the game, Messi and Robert Lewandowski were involved in a one-on-one contest with latter winning the foul. Lionel Messi Misses Penalty During Poland vs Argentina, FIFA World Cup 2022 Match (Watch Video).

Lewandowski then tried to pacify things between him and Messi and approached with a high-five. However, the Argentinian star was no mood to sort things out and moved ahead. The video of same is now going viral that Messi avoided handshake with Lewandowski. But it was purely the heat of the moment and Messi chose to continue his focus on the game.

Messi teaching Lewandowski what it takes to be a ballon d'or winner 🙏🏽Argentina and Ghana all the way pic.twitter.com/hArbDanhn1

The duo do share some history between them but after the match, they were seen sharing a friendly moment and even for some brief time Messi and Lewandowski were seen talking to each other.

Lionel Messi and Robert Lewandowski After the Match

Argentina and Poland eventually were the two teams to make it to the Round of 16 from Group C while Mexico were eliminated despite 2-1 win over Saudi Arabia, who were knocked out as well. While Argentina face Australia, Poland will take on defending champions France in the Round of 16 matches.

(The above story first appeared on LatestLY on Dec 01, 2022 09:59 AM IST. For more news and updates on politics, world, sports, entertainment and lifestyle, log on to our website latestly.com).