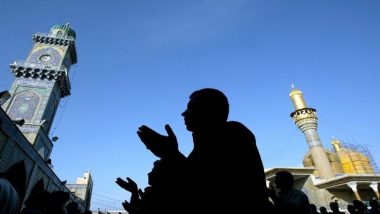 AC Milan have wished their fans on the special occasion of Al-Mawlid Al-Nabawi Al-Sharif. Muslims and followers of Islam observe October 29 and 30 as the birth date of Prophet Muhammad. This day, which is celebrated among a section of Muslims as the birthday, is known as the Al-Mawlid Al-Nabawi Al-Sharif. It is largely observed by Muslims, who follow the Sufi or the Barelvi school of thought. The Serie A club took to social media to wish their Muslim fans worldwide on the occasion. Eid Milad-Un-Nabi 2020: Date of Observance in India and Significance of Mawlid or Prophet Mohammed's Birthday Celebrations.

The day is also called Eid Milad-Un-Nabi, the birthday of Prophet Muhammad is observed on 12th Rabi ul Awwal the third month of the Islamic lunar calendar. To commemorate the birthday of the Prophet, celebrations, feasts and street processions are held on Eid Milad-Un-Nabi. Devotees also visit mosques and hold commemorative meetings to recall the teachings of the Prophet while some hold special prayers at home.

AC Milan, meanwhile, have been in terrific form in the Serie A 2020-21 and currently lead the points table after five rounds of matches with 13 points. They are one of only three teams yet to lose a game in the league. Milan have won four of their five matches and drawn one. They have had a great start to their Europa League campaign and beat Celtic 3-1 in their first match. Milan play Sparta Prague in their second Group H match on Thursday.

(The above story first appeared on LatestLY on Oct 29, 2020 07:48 PM IST. For more news and updates on politics, world, sports, entertainment and lifestyle, log on to our website latestly.com).