Erling Haaland Closes In on Joining Manchester City From Borussia Dortmund, Deal Could Be Announced This Week: Report

The Norwegian striker, who has been one of the most sought-after players in Europe, is close to landing up at the Etihad next season, according to the Athletic. Haaland is said to have preferred a move to the Premier League amidst being reportedly pursued by Real Madrid among other clubs. 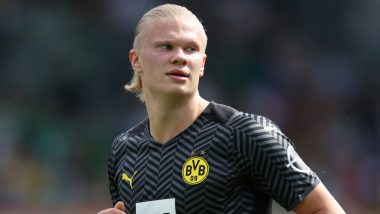 Manchester City have gained a significant step ahead in signing Erling Haaland. The Norwegian striker, who is one of the hottest prospects in Europe and have been targetted by a number of top clubs, could turn out to wear Manchester City's colours next season if the latest reports in this transfer saga are to be believed. According to The Athletic, Haaland's transfer to Manchester City is now a 'done deal' and it could be announced as early as next week. Robert Lewandowski Transfer News Update: Barcelona Receive Huge Boost In Bayern Munich Star's Pursuit

The report further states that Norwegian preferred a move to the Premier League over choosing to play for Real Madrid, a club that reportedly showed interest in purchasing the highly-rated striker. Haaland was earlier linked heavily to Manchester United in 2020 but then he had picked Borussia Dortmund ahead of the Premier League giants. In two years, the prolific striker scored 85 goals in 88 matches for the Bundesliga giants and would now embark on a whole new phase in his career.

Manchester City have been reported to trigger Haaland's release clause of 75m euros to sign the forward. The Premier League champions have lacked a prolific striker since the departure of Sergio Aguero at the beginning of the season. Although Gabriel Jesus has featured for them in some games and impressing with the opportunities he has got, there have been recent reports that has linked the Brazilian with a move to Arsenal.

(The above story first appeared on LatestLY on May 09, 2022 04:40 PM IST. For more news and updates on politics, world, sports, entertainment and lifestyle, log on to our website latestly.com).