Spain dominated for most parts of the match but failed to break through the resilient Swedish defense. Spain next take on Poland on June 19 and Sweden would play their next match a day earlier, against Slovakia. 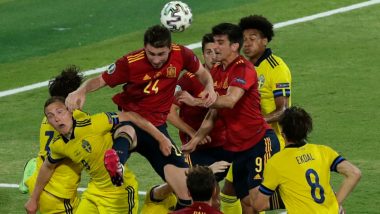 Action during the Spain vs Sweden match (Photo credit: Twitter)

A dominant Spain found it difficult to break through Sweden's defenses as they began their Euro 2020 campaign with a goalless draw at the Estadio La Cartuja de Sevilla on Tuesday. Possession-wise, Spain were on top, with a record 85% which made them the first-ever team to do so at the Euros. The 2010 World Cup champions also came up with a combined 917 passes and had 17 shots on target, but all of it was just not enough for them to break the Swedish defense. Just before half-time, Sweden came close to scoring an opener after Alexander Isak's shot was deflected onto the post by Marcos Llorente. UEFA Euro 2020 Points Table Updated

Spain's best chance of the match came in the 38th minute through Alvaro Morata who had only the keeper to beat. The Juventus striker instead shot wide of the post. Later on, midfielder Dani Olmo saw his close-range header saved by Sweden keeper Robin Olsen. Koke also had his effort shot off target from inside the box.

Despite having a tight grip on the match, the fact that they misfired and failed to win all three points would disappoint Spain and their fans. There has been a lot of things happening within the Spanish squad with Sergio Busquets and Diego Llorente testing positive for COVID-19. Earlier, the Spanish team made the news for their controversial squad selection for Euro 2020, which featured no Real Madrid player, notably Spain's most capped player Sergio Ramos.

Enrique's side had the experience of Morata upfront but they had lacked a finisher.

Gerard Moreno, who scored for Villareal in their maiden European trophy win over Manchester United a few weeks ago, couldn't find the back of the net with his effort being saved by Olsen, after coming on in the 75th minute. On the other hand, Sweden would be happy to have held Spain, which just goes to show that they have what it takes to take on the big teams, despite missing an important player in Zlatan Ibrahimovic.

Spain next take on Poland on June 19 and Sweden would play their next match a day earlier, against Slovakia.

(The above story first appeared on LatestLY on Jun 15, 2021 10:46 AM IST. For more news and updates on politics, world, sports, entertainment and lifestyle, log on to our website latestly.com).