Mumbai City FC also failed to land a shot on target despite having more attempts and more possession of the ball against NorthEast. It was the first time a team coached by Sergio Lobera had failed to find the target even once in 90 minutes. Lobera will hope his side fares better against his former team. 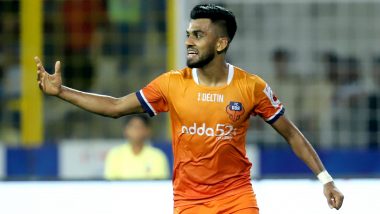 FC Goa and Mumbai City FC will search for their maiden win in Indian Super League (ISL) season 7 when they clash against each other at the Fatorda Stadium on November 25 (Wednesday). Both sides failed to record a win in their first match of ISL 2020-21. But FC Goa managed to steal a point after going two goals behind inside an hour. The Gaurs fought back and scored two in the space of three minutes to hold Bengaluru FC to a 2-2 draw. Mumbai City had no such luck and fell to a disappointing defeat against NorthEast United. The bigger loss for them, however, could be the absence of midfielder Ahmed Jahouh, who is suspended after seeing a straight red in the previous match. FCG vs MCFC Head-to-Head Record: Ahead of ISL 2020-21 Clash, Here Are Match Results of FC Goa vs Mumbai City FC Encounters in Indian Super League.

Mumbai City FC also failed to land a shot on target despite having more attempts and more possession of the ball against NorthEast. It was the first time a team coached by Sergio Lobera had failed to find the target even once in 90 minutes. Lobera will hope his side fares better against his former team. The Spaniard coached FC Goa for three seasons and helped win the League Shield last season before being sacked. He has since joined Mumbai City and also brought a number of key players from Goa to Mumbai. Ahead of the FC Goa vs Mumbai City FC match, take a look at some key players from both teams for this game. FC Goa vs Mumbai City FC, ISL 2020–21 Live Streaming on Disney+Hotstar: Watch Free Telecast of FCG vs MCFC in Indian Super League 7 on TV and Online.

He was the star of the ISL and for FC Goa last season. Boumous dazzled the fans with his movement and passes and led FC Goa to win the league. Boumous scored 11 goals and assisted nine times for Goa in the ISL last season. He was the fifth-highest goalscorer and the highest assist-maker in the league. But in his debut match against NorthEast, Boumous looked off-colour and lacked the usual exuberance he brings into a team. He will want to start the season with a good showing against his former side.

Bedia was relegated to the bench last season with Lobera using Ahmed Jahouh and Hugo Boumous ahead of him. But with the latter two moving to Mumbai with Lobera, Bedia has once again found relevance at Goa and was made the captain this season. He started deep in midfield – a position where Jahouh played last season – and was a key figure in Goa building up play against Bengaluru FC. Bedia scored five goals last season despite coming off the bench on several occasions. He will hope for a much bigger contribution this time.

The former Paris Saint-Germain star has reached double figures in both of his seasons in the ISL. Ogbeche scored 12 goals for NorthEast in 2018 and followed it with 15 for Kerala Blasters last season. He has joined Sergio Lobera’s Mumbai City this season and will be responsible for finding the net. The Nigerian will hope to replicate his form from last season and lead Mumbai to glory this time.

Brandon Fernandes changed the game after coming on in the second half against Bengaluru FC in FC Goa’s last match.  He played a crucial role in both the goals and it was his understanding with fellow substitute Alberto Noguera and striker Igor Angulo that made the difference. Brandon is coming off an excellent season with FC Goa last term where he scored two goals and made six assists and will hope to replicate the same if not more this time.

The 36-year-old Spaniard showed in his very first game what FC Goa could expect from him. Angulo scored both the goals in Goa’s 2-2 draw against Bengaluru FC. His movements off the ball and the instinct to be present at the right place left coach Juan Ferrando impressed. Angulo was signed by FC Goa as a replacement for Ferran Corominas who scored plenty of goals in his three seasons with the Gaurs. He will surely want to prove his worth.

(The above story first appeared on LatestLY on Nov 25, 2020 06:51 PM IST. For more news and updates on politics, world, sports, entertainment and lifestyle, log on to our website latestly.com).