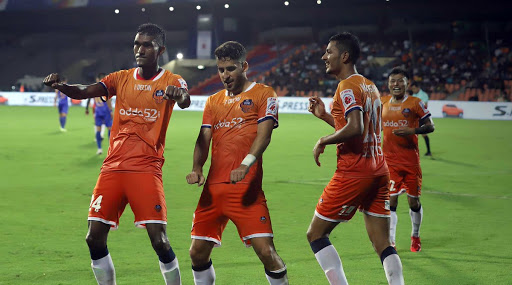 Mumbai City FC hosted FC Goa in Match 17 of the Indian Super League (ISL), 2019-20. The Match was played at Mumbai Football Arena in Mumbai. The roller-coaster of a match ended with Goa emerging victorious by an odd goal in five. The match swung one way and then another but Goa held their nerve in the final minutes to gain three crucial points. The Islanders showed great fighting spirit but fell short in the end. This result puts Goa level on points with Jamshedpur, but the Gaurs move to the top of the table because of a better goal difference. Scroll down for more details about this ISL encounter. MCFC 2 - FCG 4 | Mumbai City FC Vs FC Goa - Football Score, Summary.

Both the teams approached the match in a cautious manner and very few chances were created in the opening minutes. The teams were force to shoot from distance as not a lot of clear-cut chances were created. But as soon as Lenny Rodrigues opened the scoring in the 27th minute, the game changed and both teams began to play more freely. Mumbai City FC upped their game in search of an equaliser and created some openings but were unable to convert. Diego Carlos had the best chance for the home side but wasn’t able to hit the target. The Islanders were made to pay for the missed opportunities as Ferran Corominas doubled the away sides lead right on half-time.

A familiar sight. Coro puts the visitors up by 2!

As cautiously as the first half started, the second half was the complete opposite. Mumbai City FC came into the half with rejuvenated confidence. Sarthak pulled one back for Mumbai in the 47th minute with an excellent header and then six minutes later Souvik Chakraborty had the home side back on level terms. But the home side’s joy lasted only for four minutes as they were caught off-guard by a well-executed free-kick from the Gaurs and Hugo Boumous was at the end of it to put the away side back in front. In the closing minutes of the game Carlos Pena sealed Goa’s win with a brilliant near-post finish. Goa managed to hold onto the lead this time and recorded a crucial away win.

What a way to score your first #HeroISL goal, Sauvik Chakrabarti! 👏

Hero of the Match

Goa are still undefeated after four games and have now recorded their first away win of the season. On the other hand, Mumbai City have lost back-to-back home games, with a 4-2 scoreline are winless since the start of the season. Because of this result, Goa move to the top of the points table while Mumbai remain fifth.