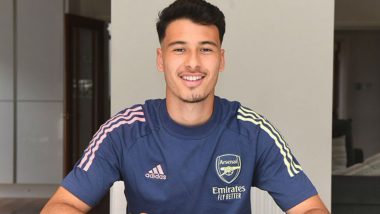 Martinelli has scored 10 goals in 26 appearances this season since joining from Ituano last summer.

"I am very happy that Gabi has signed a new contract with us. He is a very talented young player and he has impressed us with his performances, attitude and work-rate. We are looking forward to getting him back to full fitness and to watching his development at our club," head coach Mikel Arteta was quoted as saying by the official club website.

The Brazil U-23 international began his Arsenal career by scoring on his debut on our USA pre-season tour last summer against Colorado Rapids.

He scored his first Premier League goal in Arsenal's 3-1 win over West Ham United in December and has become the first teenager to score 10 goals in a single season for the club since Nicolas Anelka more than 20 years ago.

Earlier this week, 18-year-old winger Bukayo Saka also signed a long-term deal with Arsenal. Saka has been at the club since the age of seven. He made his debut in a Europa League match on November 18 and has since made 34 first-team appearances for the side. Saka has assisted 11 goals and is the first teenager to do so for Arsenal since Cesc Fabregas in the 2006/07 season.

(The above story first appeared on LatestLY on Jul 04, 2020 01:12 PM IST. For more news and updates on politics, world, sports, entertainment and lifestyle, log on to our website latestly.com).