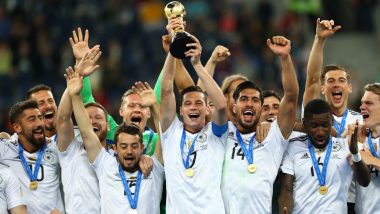 Defending champions Germany will be hoping to become the first team since Brazil in 1962 to defend their title but off late the results in friendlies have put up a question mark on their credibility to achieve this feat. But long-time coach Joachim Loew was quick to point out that these are part and parcel of the game and helps to keep the team grounded. Loew fielded an inexperienced line up in the 2017 Confederations Cup and emerged as champions. Manager Joachim Loew announced 27-man preliminary world cup squad and surprisingly did not include Mario Gotze’s name in Germany team lineup. FIFA World Cup 2018 Schedule in IST for PDF Download: Fixtures, Groups, Time Table with Match Timings & Venue Details of Football WC in Russia.

The biggest issue with German team is the fitness of skipper Manuel Neuer, who has been out since September and looks highly unlikely to start making way for Barcelona’s Marc-Andre Ter Stegen to be the shot-stopper for the Germans. There is also the question mark on the fitness of Jerome Boateng with the injury he sustained in the Champions League semi-final against Real Madrid. His club teammate Niklas Suele will replace him in the starting eleven if he fails to gain full fitness. The bright upcoming talent in Joshua Kimmich will be a most likely starter and so will the relegated Cologne’s left back Jonas Hector.

The German midfield is like an engine with Toni Kroos, Sami Khedira, Mesut Ozil, Thomas Muller and Marco Reus all dynamic world beaters who interchange positions, track back and create chances with ease. They form the core of the team and have experience of winning the cup from 2014. The striking will have the new kid on the block Timo Werner who has been excellent on the international scene off late. Loew may also use Mario Gomez and Sandro Wagner as and when he feels the time is right for the tall and strong strikers to come on.

Germany were placed in Group C of the European World Cup qualifiers and won all ten matches of their group scoring 43 goals in the process which is a record in itself. They absolutely destroyed their opposition, and there was never a doubt over their qualification right from the beginning. Sandro Wagner and Thomas Muller grabbed 5 goals each to be the leading scorers of the group.

Germany topped Group G with wins over Portugal, USA and scored draw with Ghana. They needed extra time to propel over a disciplined Algerian team and knocked out France by a solitary goal in the quarters. Their demolition of Brazil in the semi-final by a margin of 1-7 will forever be etched in the memories of the Brazilian fans, and Mario Gotze’s wonder strike handed the cup to the Germans and a heartbreak to Lionel Messi and his Argentine mates.

Thomas Muller: The German midfielder can play in a host of position and whatever position he plays in the forward areas he seems to excel in it. He burst into the international scene with his staggering performance in the 2010 World Cup and has 10 World Cup goals to his name.

Toni Kroos: The Real Madrid midfielder dictates the tempo of the game for his team, and whenever he has a good game, the team is rest assured to do well. He was immense in the semi-final win over Brazil in the 2014 World Cup and the final against Argentina when the going was tough. He has won it all at a very young age and would be raring to go in Russia.

Defending champions Germany will begin their FIFA World Cup 2018 campaign against Mexico on June 17 followed by Sweden on June 23 and South Korea on June 27 in Group F matches. Germany will also be playing two international friendly games against Austria on June 2 in Worthersee Stadion, Klagenfurt and Saudi Arabia on June 8 in BayArena, Leverkusen.

(The above story first appeared on LatestLY on May 22, 2018 10:39 AM IST. For more news and updates on politics, world, sports, entertainment and lifestyle, log on to our website latestly.com).