Happy Birthday Lionel Messi: 5 Records Of the Argentine That Could Remain Unbroken Forever 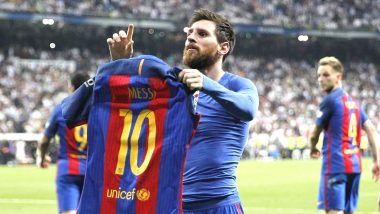 Born on June 24, 1987, Lionel Messi has been truly one of the biggest footballers produced by Argentina. Collecting Ballon d’Or award six times in his career,  Messi has been one of the best sporting icons. When you talk about Messi, one often remembers Pep Guardiola's old adage. Back then the former manager of Barcelona had said, "Don't write about him, don't try to describe him. Just watch him.” Even at the age of 33, Messi shows no signs of ageing and is really unstoppable. Shattering records seems to be his regular business and on his birthday, we bring you five records that could remain broken forever. Ballon d’Or 2019 Awards: Lionel Messi Pips Virgil Van Dijk by Just 7 Votes to Win Sixth Golden Ball, Check Full Results.

Lionel Messi has always been one club holder and has always played for Barcelona since a really long time. His Champions League record and has scored 114 goals for the Catalan Giants. Now, this record of the six-time Ballon d'Or winner could remain unshattered.

Now, this was yet another remarkable achievement by Lionel Messi. The Barcelona captain was only 25 years, six months and 15 days old when he was bestowed his fourth Ballon d’Or award. He is the only player to have won four Ballon d'Ors before turning 26.

Most scores in consecutive matches

Lionel Messi has scored 33 goals in 21 consecutive La Liga games during the 2012-13 season. Bayern Munich's Gerd Müller has been the second-best who had scored 22 goals from 16 games during the season of 1969-70.

Here's another record by Lionel Messi which could remain unshattered forever. The six-time Ballon d'Or winner created a world record by scoring 91 goals in one calendar year in 2012. This is quite a mammoth task for someone other footballers to achieve.

Now, a lot many would disagree with this point that this record of Lionel Messi. The six-time Ballon d'Or winner collected the last gong in 2019 and thus became the player who won the highest number of gongs.

This is all we have in the article for now, is you think that we have missed out on any other records, feel free to contribute in the Comments section. Coming back to Messi's birthday, we wish him a Very Very Happy Birthday!

(The above story first appeared on LatestLY on Jun 23, 2020 11:00 PM IST. For more news and updates on politics, world, sports, entertainment and lifestyle, log on to our website latestly.com).