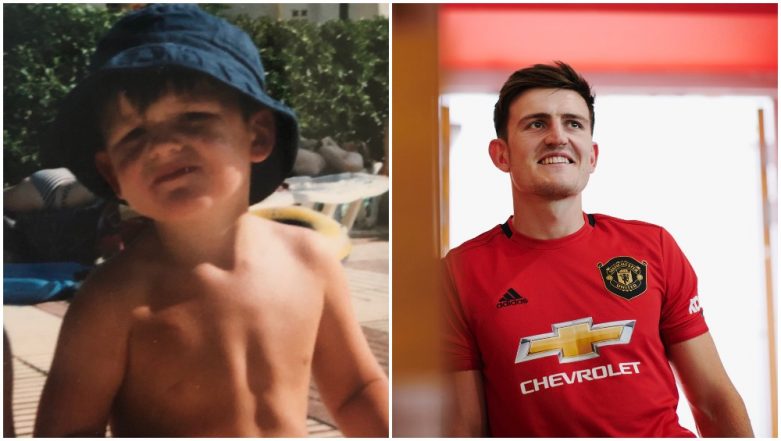 Harry Maguire completed his record move to Manchester United on Monday making him the most expensive defender in world football. The former Leicester City centre-back was signed for a record £80m by the Red Devils and it turns out playing at the Theatre of Dreams was his childhood dream. As revealed by his mother in her post on social media, young Maguire always wanted to play for United and was a big Alex Ferguson fan. Harry Maguire Becomes World’s Most Expensive Defender after Manchester United Confirms His Signing.

Maguire had even played against Manchester United during his time with Sheffield United. Sheffield played Manchester in the FA Youth Cup final in 2011, which included future Manchester United stars Paul Pogba, Jesse Lingard and Maguire himself. The big-headed defender was, however, was in the opposite team that evening. But his performance in the 2-2 draw is said to have impressed Sir Alex Ferguson, who was watching the game. The former Man United manager had then written a letter to Maguire, who by then was already a United fan.

A Childhood Dream That Came True

When your son dreams of playing for Man Utd as a little boy and you wake up one morning and it’s happening #dreamscancometrue so proud of u ❤️@HarryMaguire93 pic.twitter.com/duVvQ4Vyf9

Recalling her son’s younger days when a little Maguire always dreamt of playing for Manchester United, his mother said that it was a dream come true for her son. “When your son dreams of playing for Man Utd as a little boy and you wake up one morning and it’s happening,” tweeted Zoe Maguire (mother) after her son had completed the record-breaking deal to Old Trafford.

English Premier League side, Man United, announced Maguire’s £80m transfer from Leicester City after the England international completed his medical. Maguire has signed a six-year contract for the Red Devils. His deal made Maguire the most expensive defender eclipsing the £75m Liverpool paid for Virgil van Dijk.

“I am delighted to have signed for this great club,” Maguire was quoted as saying by The Guardian. “I have thoroughly enjoyed my time at Leicester and would like to thank everyone at the club and the fans for their fantastic support over the past two seasons. However, when Manchester United come knocking on your door, it is an incredible opportunity.

“From my conversations with the manager, I am excited about the vision and plans he has for the team. It’s clear to see that Ole [Gunnar Solskjær] is building a team to win trophies. I am now looking forward to meeting my new teammates and getting the season started,” Maguire added.